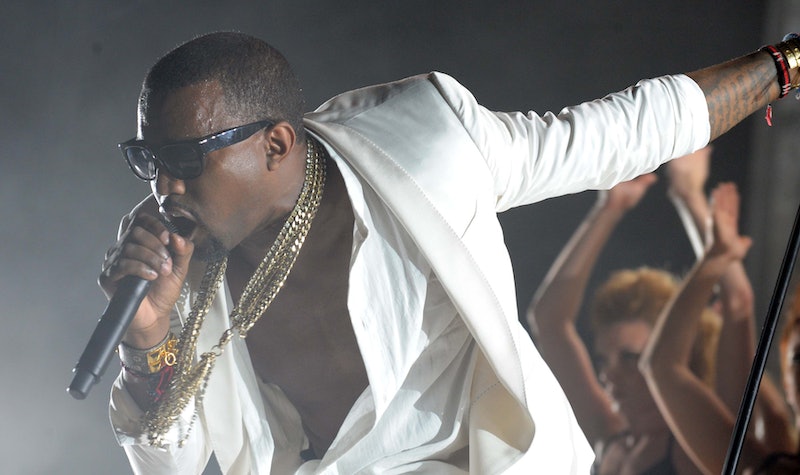 Let me begin by saying that I am a huge fan of Kanye West — both as a rapper and as a person. Kanye is one of those artists that has what I call an awesome ego, in that his ego is unreal but it's backed up by a whole lot of awesome. But he isn't for everyone, and that is something I can understand. I mean, my love of the rapper did not stop me from disapproving of his rant against Beck after the 2015 Grammys, because he is often wildly, grossly, and offensively out of line with many of the things he does or says. And that is the position I once again found myself in on Friday, because Kanye has slut shamed Amber Rose in a misguided attempt to show solidarity with the Kardashian Klan, who are currently at war with Rose.

In fact, the word misguided is inaccurate. Misguided implies that Kanye did not know what he was doing. Misguided implies an accident. Misguided implies a certain lack of responsibility. There is nothing about Kanye's statement that can be mistaken for accidentally or unintentionally offensive; he meant to slut shame Rose, and he meant for it to hurt her. But what he doesn't understand is that slut shaming doesn't just hurt Rose. Slut shaming hurts every women everywhere — including his own wife, Kim Kardashian, and daughter North West — because it feeds into the insidious societal double standard that a woman exploring her sexuality makes her "a slut."

For those who aren't aware, who have forgotten, or who are trying to forget, here is exactly what Kanye had to say about Rose:

"She’s just soaking in the moment. If Kim had dated me when I wanted, there would be no Amber Rose. By the way, it’s very hard for a woman to want to be [with a man] who’s been with Amber Rose. You know what I’m saying? I had to take 30 showers before I got with Kim.”

If you need to take a moment to heave a mighty sigh, I don't blame you. To be fair, there has been a lot of slut shaming on both sides of the Kardashian-Rose feud leading up to this point. The word "whore" has been thrown around liberally and leaked naked photos have been used as ammo in the arsenal of Shots Fired. With each passing day, this feud seems to get uglier and uglier, and it's the kind of war that pretty much ensures no one comes out of it smelling like roses (pun unintended). Kanye was wading into a minefield, so it was pretty much inevitable — especially considering the fact that he's Kanye — that he would say something explosive. But there's a difference between understandably incendiary and this incredibly disappointing statement.

Slut shaming is such a dehumanizing concept for women, and the way in which Kanye did it in particular is horrific. He said that Rose is so dirty because of the sex that she has had that he needed to take 30 showers lest her filth bleed out onto him. Because, apparently, having had consensual sex with people of her choosing makes Rose dirty — not because having sex is inherently dirty, as Kanye and Kim K have themselves had it, but because Rose is dirty for having had it. And that is an implication with a historical context that Kanye didn't seem to think about before he threw those words out in the world. The implication that a woman exploring her sexuality is dirty, wrong, bad, but none of those words apply when a guy does. That women can be soiled or debauched by having sex, but not men. That women are sluts, and men are celebrated for their virility.

So, sure, I understand why Kanye said what he said. I understand that he was just standing up for the Kardashian-Jenners that Rose called out in the infamous interview, and subsequent tweets, that launched this entire feud. I understand his motivation, but I don't believe that they are a justifiable reason for Kanye to have said what he said or how he said it. I don't believe there is ever any reason or excuse for slut shaming, or for a man to imply that a woman is filthy for having freely explored her sexuality. The hypocrisy and insanity of the statement is not lost on me, but this is not one of those things over which we can just shake our heads and go, "There Kanye goes again." This is not one of those things we should just let go, or wave away, as another burst of Kanye's outrageousness.

This is a famous celebrity feeding into a societal stigma that continues to plague women to this day, a societal stigma that has lasted for actual centuries. The same world in which women are now free to sleep with whoever they want is the same world that will turn around and shame that woman for it, the same world that has a thousand words to describe a woman who isn't a virgin and no such corresponding words or stigma to describe a man. With his words, Kanye is disrespecting women everywhere who have to combat that stigma every day, who have to live in that society every day, who have to know, every day, that their world has not moved past that kind of backwards thinking. In sticking up for one woman, Kanye has disrespected all of them. And that is not okay.