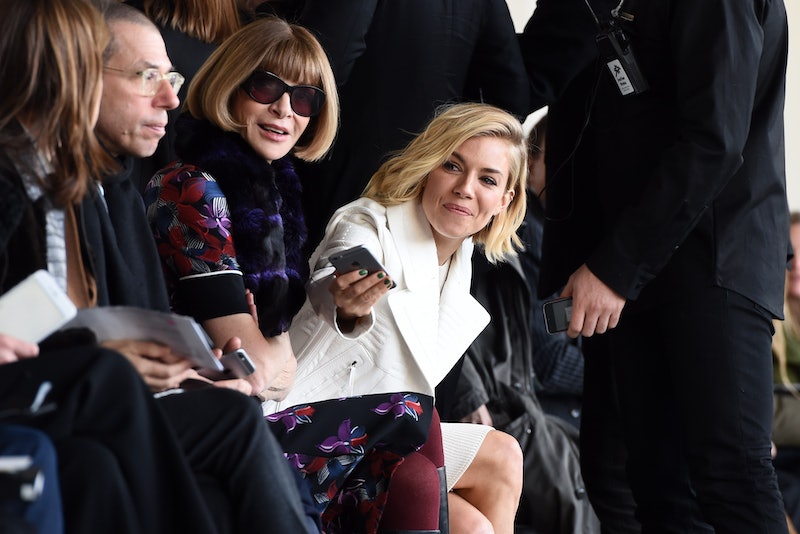 It's no longer a secret that fashion week, nay month, is stressful. Not only do designers have to put on huge shows, editors are expected to galavant all about the city to see as many as possible and somehow still have the energy to then evaluate the collections. Illustrator, photographer, and motion designer John McLaughlin created hilarious fashion gifs to help remind the style set not to take itself so darn seriously in the midst of all the chaos.

McLaughlin photographed fashion insiders, celebrities, and models on the runway with their hands outstretched so that the final product makes it look like they're actually holding an adorable little monster, which McLaughlin refers to as a "fuzzy dude."

He told HuffPo Style that he invented the character while "messing around" and posted a bouncing gif version to his popular Tumblr page, after which it "randomly got tagged and shared." The idea to have fashion's heavyweights hold the little guy came to McLaughlin when he tried to brainstorm a fun, original way to cover the shows through a partnership with Milk Studios.

Creating the dude was one thing, but getting celebs and editors like Anna Wintour to participate was another. McLaughlin told HuffPo Style that he didn't even know who Wintour was before this season (for shame!) He approached the famed editor and, after he showed her the concept on his phone, and she agreed to pose for a photo. The result, pictured below, is hilarious — even if she does appear less than thrilled to be there.

McLaughlin also got stars like Whoopi Goldberg, Zosia Mamet and ManRepeller's Leandra Madine to participate. Take a look at some of his fuzzy dude masterpieces from NYFW and be sure to follow the artist on Tumblr and Instagram for more!