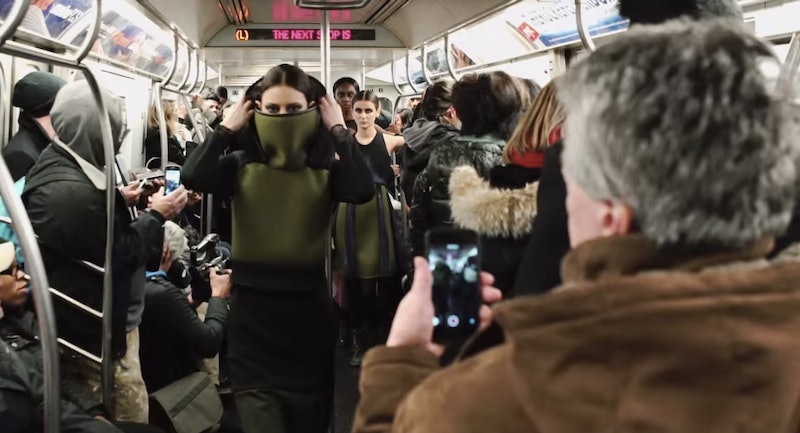 You may not have heard of designer Kim Mesches before, well, now. But his guerrilla New York Fashion Week show that took place on the subway is bound to put him on the map. Mesches debuted his fall/winter 2015 collection on the L train between Brookyln and Manhattan. There were no invites and no warnings — pretty much the opposite of the tents at Lincoln Center.

Mesches and a team of five models boarded the train and began walking as if the L train were the runway (and I guess, in this case, it kind of was). Based on some pictures from his Instagram, I'm pretty sure the models were allowed to grab onto the polls for stops. Because, you know, safety first. And spectators took pictures and video of the whole show — wouldn't you do the same if a freaking fashion show took place during your commute?

By some act of the fashion gods, the show went totally fine. If you have ever ridden on a New York City subway, you know a full-blown fashion show could still be one of the tamer things you see down there. The other passengers steered clear of the models and allowed the presenation to progress as planned, which is shocking in and of itself. One thing is certain: this whole thing definitely did not occur during rush hour.

The models took the show off the subway once they hit 14th St. and began walking on the platform. Check out the whole thing below!