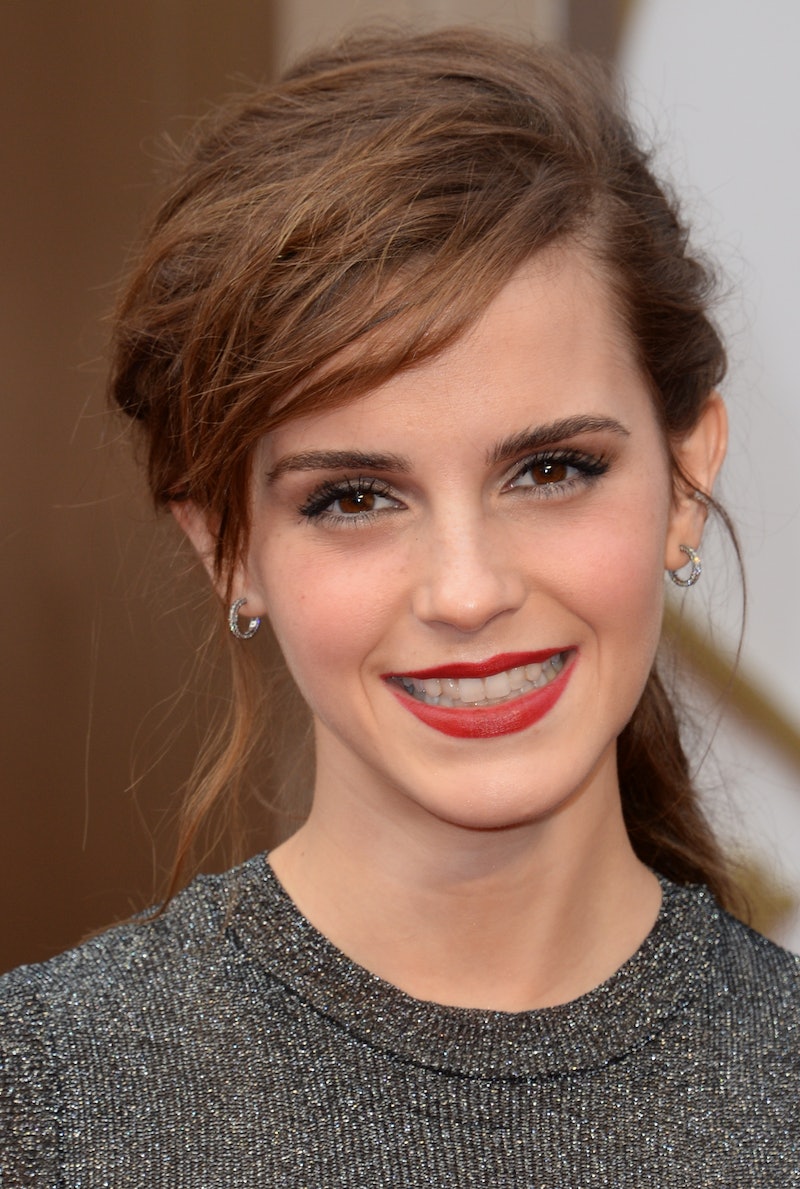 If you have, for some totally inexplicable reason, been away from the Internet and/or your social media accounts lately, let me fill you in on what is the most wonderful rumor in existence: Reportedly, Emma Watson and Prince Harry might be dating. Yup, dating. Of course, until one of their reps confirms or denies the relationship, I'm a little skeptical of it, because it almost seems too good to be true, but my fingers are crossed that the rumors are at least slightly based in reality. After all, how perfect would it be if Watson eventually became Princess Emma? Don't act like she's not already royalty. And can you imagine what a Prince Harry and Emma Watson date would actually look like? Answer: Exactly like something straight out of a Disney movie.

In fact, I'm so convinced that this relationship would work that I'm already picturing their future royal wedding. Sorry, Kate Middleton, but you're going to have to step aside, because this will be the most epic ever. And then, their future children! They'll have Watson's beauty and Harry's royal pedigree, and plenty of playdates with their cousin, George, and his future brother and sister. And they all will live happily ever after. (Am I getting ahead of myself?)

But first? The actual dating part has to happen. And if you ask me, it'll look a little something like this.

Harry will be a total gentleman

From their very first date, the chivalry will be very apparent: He'll open the door for her, pull her chair out for her when they get to dinner, throw his coat over puddles so she doesn't have to get her expensive and fashion forward shoes wet... all the stuff guys do in movies made before the '80s. Old fashioned? Yes.

And Emma will be polite at first...

But eventually, she'll stop laughing at all his jokes, because Harry doesn't strike me as a funny guy, and Emma isn't the kind of girl to pretend a man's jokes are funny, even if he is royalty. Instead, she'll give him a playful eye roll, and will provide the perfect comeback every time.

Probably somewhere that serves French food, because that is the epitome of wealth and fanciness. Harry will purchase an expensive bottle of wine for the table, and Emma will wear a little black Givenchy dress.

And over dinner, they'll talk about important issues.

World events, how to handle the whole ISIS thing, feminism... and Harry will agree, because Emma knows what she's talking about ALWAYS. Emma would totally keep her career going after they get married too, no matter what the palace says. Equality.

When dinner's over, they'll ask the driver to take the long way home.

Because the conversation is just too good, and Harry hasn't worked up the nerve to tell Emma what an awesome Hermione she is. Because it's the truth. He'll be a little embarrassed, because he sounds like a fanboy, and Emma will blush.

He'll walk her to the door for their very first kiss

Just a quick peck on the lips, and it'll be adorable.

And they will live happily ever after.

You know, 'til People or whoever gets a response from Emma's rep saying this rumor is total crap. Until then, just let me live in my fantasy world where they stay up texting all night about who the best member of One Direction is and other British things like that.

More like this
Lilibet & Prince Charles’ First Meeting Was Emotional, According To Reports
By El Hunt
An 'Emily In Paris' Fave Is Joining Season 5 Of 'The Crown'
By Bustle Editors
Lindsay Lohan Is “The Luckiest Woman In The World” After Her Marriage
By Grace Wehniainen
Chrishell Stause & G Flip Have “No Rules Or Regulations” In Their Relationship
By Brad Witter
Get Even More From Bustle — Sign Up For The Newsletter