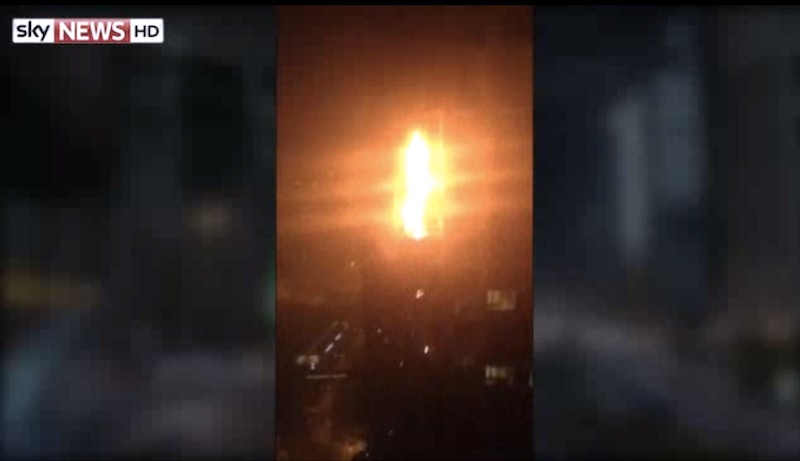 A soaring residential skyscraper in Dubai went up in flames on Saturday, though, luckily, no residents were injured. The building, located in the city's popular marina district, is one of the world's tallest structures, standing at 79 stories tall. Dubai is home to a number of sky-high buildings, including the 163-story Burj Khalifa.

The cause of the powerful blaze remains unknown. According to BBC News, the fire quickly escalated due to high winds, which pushed the flames across the towering skyscraper. One eyewitness told BBC News that "there was debris flying everywhere, falling into neighboring buildings."

Although the sight of the swelling flames in the middle of Dubai's most populous area appeared catastrophic, Dubai police chief Maj. Gen. Khamis Mattar al-Muzeina said the fire was extinguished before it could cause serious damage to the structure. Some of the building's residents were treated for minor injuries by ambulance crews, but for the most part, everyone was safe and unharmed, al-Muzeina said.

CNN reports that it took about three hours for firefighters to extinguish the fast-moving flames. Witnesses told the news source that the fire may have started in the center of the 50th floor, then moved outward. Authorities are still investigating the cause.

Somewhat ironically, the building is called The Marina Torch, or just "The Torch" among Dubai residents. The luxurious residence is popular among high-paying expatriates who make their home in the modern United Arab Emirates city.

Although authorities have not confirmed the source of the fire, Wall Street Journal reporter Rory Jones, who lives in the Torch Tower, tweeted that officials believe the fire began from either a cigarette, shisha coals or a barbeque on a balcony. Jones added that residents who live in the buildings top floors haven't been able to return to their apartments on Saturday. Residents whose apartments were not damaged have been able to return.