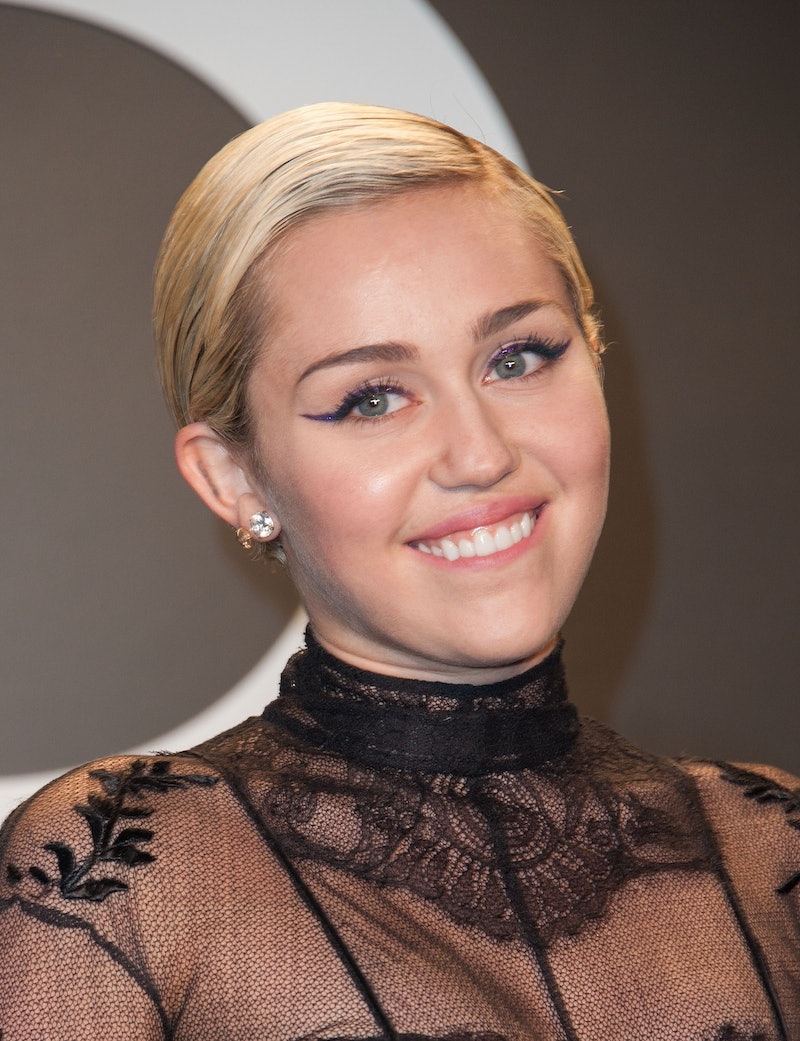 Last night, Miley Cyrus took a break from being a trippy fashion zephyr to try out this whole "nightmare dressed like a daydream" thing that T. Swizzle speaks so highly of. At the Tom Ford A/W 2015 Womenswear presentation in LA, Miley Cyrus wore a lace sheer black gown that is strangely reminiscent of a look from Taylor Swift's 'Blank Space' music video. You know the come-hither lace gown that screams "sexy hysteria?" Yeah, that's the one.

The detailing on Miley's Tom Ford number is impeccable — from the lines, to the embroidery, to the bustier/brief thing going on underneath the overdress— and she looks elegant and amazing in it. The makeup and hair is where Miley's vibe diverged from Taylor's. Instead of a red lip and tear-smeared eyeliner, Miley went for a pink pout and a purple glitter cat eye. Instead of finger waves, Miley wore her blond hair in a slicked-down page boy style. In this writer's humble opinion, Cyrus wore the crap out of this dress.

In another world, my entire wardrobe would be stocked with dresses like this, and my life would consist of laying on chaise lounges and drinking champagne from crystal saucers. Also, I would own two black and white spotted Great Danes just like the ones that Lady Gaga hung out with all the time at the beginning of her career. That is all.

Now, when Swiftie did a similar look in Elie Saab, she may have been a bit more covered up...

In both cases, we can infer that a black lace gown is the prescribed uniform for luring young Kennedy-esque men into a stately country mansion filled with taxidermy and the ghosts of old lovers. With Taylor it was fake boyfriend Sean O'Pry. With Miley, it's Patrick Schwarzenegger.