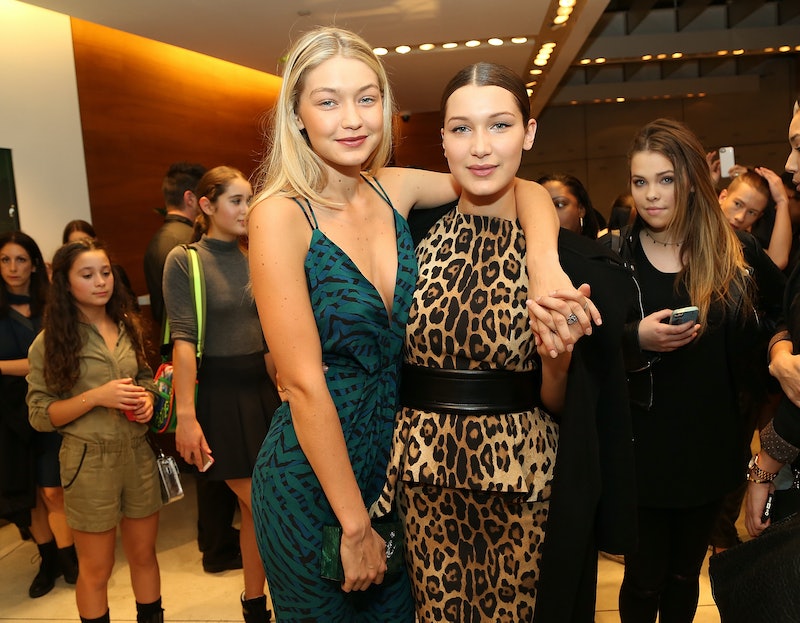 Following much speculation, up-and-coming model Bella Hadid finally made her runway debut on Friday night at Tom Ford’s F/W 2015 presentation, which took place in — gasp — Los Angeles. The 18-year-old strutted her stuff alongside the hottest models of the moment, including Karlie Kloss, Joan Smalls, Lindsey Wixson, and her sister, Gigi Hadid.

The younger Hadid sister rocked a thick black coat and a pencil skirt resembling chainmail on a rose petal-covered runway, which you can only imagine was incredibly difficult to traverse while wearing heels. Ford definitely didn’t make it easy on the runway novice! But that's not exactly surprising, since he's known for being a rule breaker, which only helps him secure an all-star model cast and a celebrity-filled front row.

Ford's collection featured a mix of ready-to-wear pieces with lots of denim, fur, fringe and leather, and a selection of beautifully-crafted gowns, like the gowns modeled by Kloss and Smalls. HIs decision to show his collection in LA rather than at London Fashion Week have people wondering: Will any of these dresses be worn at Sunday's Academy Awards ceremony? Only time will tell, but it's not like he needs the attention. Showing his collection in a city that isn't in his native land and casting model newbie/socialite Bella Hadid has given him all the press he needs.

See Bella Hadid killing it on the Tom Ford's runway:

And here's her sister Gigi Hadid modeling some fringe.