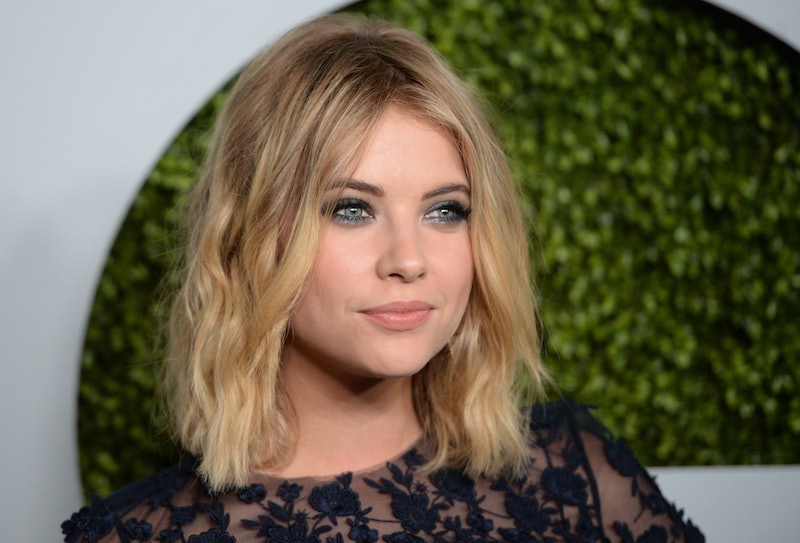 Today, let's attempt to answer the age-old question: Are they engaged, or just playing an engaged character in a movie? Ashley Benson, your fave from Pretty Little Liars , posted an Instagram photo captioned "Dinner" that shows her sitting at a table in front of a stack of dirty paper plates in what looks like a high school cafeteria or a teacher's lounge, or some kind of similarly depressing fluorescent space, wearing a sizable sparkly ring on her left ring finger.

Uncertainty swirls and Instagram mystery abounds, but before indulging in a collective fangirl meltdown, let's take a look at the facts:

Fact #1: If Benson really was engaged, I'd be SO HAPPY FOR HER.

Fact #2: Valentine's Day, also known as prime engagement season for a lot of people, was just a couple weekends ago. If someone famous were to get engaged in February, it wouldn't be crazy for us to be hearing about it the weekend after the day when celebrities love getting engaged. It isn't entirely clear who Benson would be engaged to since she and her on-again, off-again boyfriend Ryan Good split up last December, but it wouldn't be entirely outside the realm of possibility for Benson and Good to get back together on Valentine's Day, or for Benson and ex-boyfriend Tyler Blackburn to get back together.

Here's the photo of Benson wearing the ring:

However, that brings us to Fact #3: Benson is reportedly starring in Chronically Metropolitan, an independent comedy with Mary-Louise Parker, Chris Noth, and Shiloh Fernandez. According to Variety, Benson plays Fernandez' "lost love" who is engaged to be married. Here's a photo from the set Benson shared on Instagram, with the caption "Pic from day 1 chronically metropolitan":

If you squint, you can see a similar ring clearly visible on Benson's ring finger.

As much as fans might wish for Benson to finally find love in a hopeless place, the upcoming film is probably the most likely explanation for Benson's Instagram photo with what looks like an engagement ring. The picture looks like it could have been taken during a dinner break at the crafty table on the set of Chronically Metropolitan, and that Benson is trolling your heart.