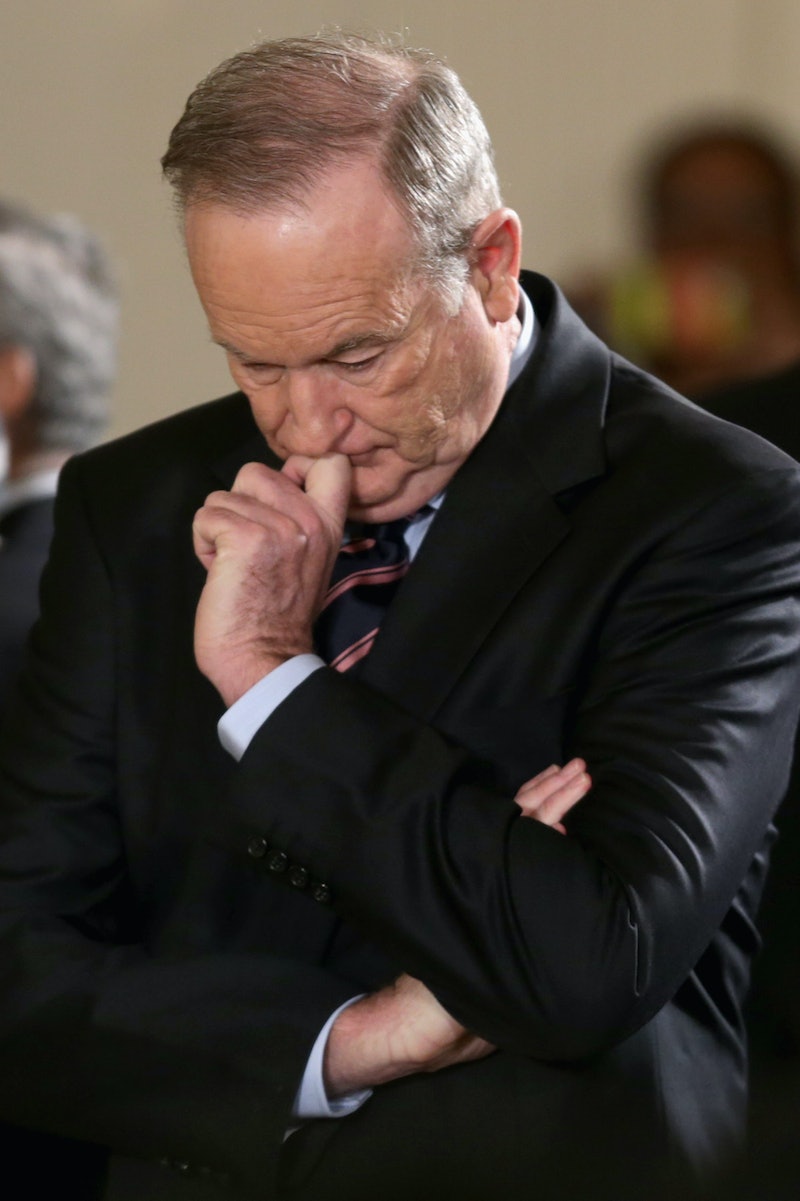 Well, now things are getting interesting. It's possible you've heard that Fox News host and longtime cable news king Bill O'Reilly has been in a little trouble lately, having been accused by The Nation's David Corn of falsifying stories of himself reporting from active, dangerous war zones. In other words, the very sort of thing that O'Reilly aggressively lambasted NBC's Brian WIlliams for. And Saturday, things may have gotten a great deal worse for him — Bill O'Reilly's war stories were called out by former CBS correspondent Eric Engberg, who claims he was in Buenos Aires with the shouty cable news king back in 1982, and that it was nowhere near as dire as he since claimed.

In a long Facebook post Saturday, ex-CBSer Eric Engberg laid down the discrepancies between his memories and O'Reilly's, and frankly, it's precisely the sort of thing the 65-year-old host should likely fear most: people who were actually there coming out of the woodwork against him.

That, lest we forget, was what fully triggered the Brian Williams controversy — U.S. Army veterans taking to Facebook to claim he'd lied about riding in a helicopter that took grenade fire. Up until now, Corn and O'Reilly had been playing the leads in this conflict, with Corn's measured and somewhat devastating inquiries being answered by little more than O'Reilly's fumes. But now there's a third voice in this equation, and his voice could pose a big threat to O'Reilly's, let's say, tenuous credibility.

Describing their time in Buenos Aires as more an "expense account zone" than a war zone, Engberg detailed the many ways O'Reilly's characterizations don't add up (he's claimed to have reported from active war zones, seen unarmed citizens get gunned down, and dragged a bleeding cameraman to safety, among other things).

I can provide some eyewitness information on this matter because I was one of the correspondents in Buenos Aires with O'Reilly and the rest of the rather large staff of CBS News people who were there "covering" the war. To begin with "covering" is an overstatement of what we were doing. Corn is correct in pointing out that the Falkland Islands, where the combat between Great Britain and Argentina took place, was a thousand miles away from Buenos Aires. We were in Buenos Aires because that's the only place the Argentine military junta would let journalists go. ... It was not a war zone or even close. It was an "expense account zone."

Engberg reserved particular scrutiny for O'Reilly's claim that a cameraman was attacked during a riot in the Argentinian capital — while he conceded that anti-U.S. sentiments had made it somewhat "dicey" for American reporters, he was entirely dubious of his heroic tale.

O'Reilly has said he was in a situation in Argentina where "my photographer got run down and hit his head and was bleeding from the ear on the concrete and the army was chasing us." The only place where such an injury could have occurred was the relatively tame riot I have described above. Neither [then-CBS bureau chief Larry Doyle], who would have been immediately informed of injury to any CBS personnel, nor anyone else who was working the story remembers a cameraman being injured that night. No one who reported back to our hotel newsroom after the disturbance was injured; if a cameraman had been "bleeding from the ear" he would have immediately reported that to his superiors at the hotel. This part of O'Reilly's Argentina story is not credible without further confirmation, and O'Reilly should identify the cameraman by name so he can be questioned about the alleged injury.

Taken in full, the post looks like a monumental headache for O'Reilly, who's already shown a remarkable lack of tact, judgment and sense in how he's handled these allegations. It's a long-recurrent pattern — when it looks like somebody's caught him in a lie, he doubles down, sometimes with a side of verbal abuse. In this case, the subject of his ire is the man who set off all this trouble for him, and he's lived up to form. He's already called Corn a liar, a "guttersnipe," a "piece of garbage," and says he hopes Corn will "be in the kill zone" after his stories are vindicated.

That last remark earned him a demand from Mother Jones that he apologize, but I wouldn't hold my breath. A left-wing magazine demanding an apology from Bill O'Reilly for anything seems like the very definition of futility. It'll be interesting whether Fox News actually steps in and plays some role in this — for the time being, it seems like they're content to let it rage as a hands-off war of words.