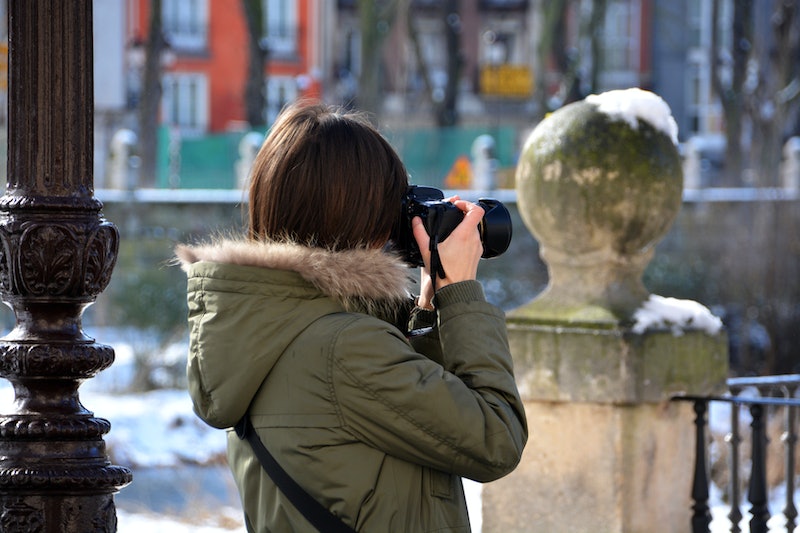 New York Fashion Week is finished, leaving some of us bereft. (I assume that Bustle's own Tyler Atwood misses the flood of Instagram weirdness.) Throughout the year, various fashion weeks in major global cities draw hordes of style devotees, in turn attracting photographers who want to snap pictures of models off duty, celebrity attendees, and run-of-the-mill citizens who happen to have fabulous outfits. (Aki Photography is my favorite.) Some industry members grumble about the chaotic hoi polloi: Fashion bloggers dying to be featured in a high-profile photographer's blog, or better yet, one of Condé Nast's glossy magazines, run around getting in the way of "professionals." (The implication being that fashion bloggers are not professionals, even when they earn a living from their websites.) That's not a debate I want to field, although usually I defend the bloggers — hooray for democratizing fashion! Rather, I'm curious about the photographers lugging cameras through these events, documenting the second catwalk, a.k.a. the pavement.

It must be exhausting. You have to be careful with your equipment. You have to move fast to get the best shots. Change your lenses at lightning speed! Technical considerations aside, the part that I would find hardest would be constantly interfacing with people. There are a zillion strangers milling around, a crowd to navigate. You might even have to jostle shoulders with another photographer.

The best street photographers, most prominently the Humans of New York guy (who doesn't focus on fashion, although he documents plenty of it), include little snippets of conversation with their subjects, so the viewer can learn something about the person beyond their aesthetics. Even those photographers who don't ask permission or try to talk to their impromptu models — consent is not legally required when taking photos in public — face scrutiny, by virtue of working right there where everyone can see them. The few times that I've tried my hand at street style photography, I was too shy to do it properly. I felt like I had to be surreptitious. There was inherent stress in the process, and not stress that I felt good about handling.

When I pitched this article to my editor, I told her optimistically, "It'd be fun to go into San Francisco with my camera and pick out the best-dressed people!" I totally overestimated my courage. I wanted to push myself, to be a fashion journalist rather than just a commentator, to confront my social anxiety by standing outside a train station and jogging after notable passersby, calling out, "Hi, wait, I work for a fashion website!" As you have surely gathered, that didn't happen.

Ironically, not trying to live a day in the life of a street-style photographer strengthened my respect for those who do. The prospect is so intimidating! You have to maintain lots of pluck and chutzpah, although you can scale up gradually. Australian photographer Danielle Castano told StyleCaster that when she started, "I knew very little about cameras and just started taking my compact camera everywhere and practicing on the street... eventually I was given an SLR for Christmas one year. I started shooting friends [who] were bloggers and then slowly built up the courage to attend fashion weeks for the purpose of shooting street style."

When I was actively fashion blogging, I made a few stabs at capturing street style. This worked out because I happened to have my camera with me, and I could seize the moment after a sudden surge of willingness to approach strangers. Planning a trip to go out and do this requires significant activation energy, meaning that the hardest part (for me) is simply getting dressed and setting off. It doesn't sound like much, but for someone who struggles with depression, getting psyched up for a new, scary activity is tremendously difficult. To be a street style photographer, you don't necessarily have to be an extravert, but you do have to be good at leaving the house. Well, duh, right?

Leaving aside the business and backend of blogging, what you really need to be a good street style photographer is proactive people skills. You need to be ready with a smile and a flattering comment, or general goodwill like the veteran Bill Cunningham of The New York Times . Most essentially, you need to be a person who does things. At face value that's true of many professions, but not in the sense that I mean it. For instance, I do plenty of things, but I am not a person who does things. Such a person is confident and outgoing. That is the simple crux of it. Luckily, confidence and outgoingness can be developed or at least augmented. I used to be a true recluse, but now I occasionally attend art gallery openings. Maybe in a couple of months I'll report back after completing the article I originally proposed, and say that it was a breeze. (Probably not.)

I'll leave you with the words of Scott Schuman, who founded The Sartorialist. He says of his success, perhaps ruefully, "The challenge I had before was getting people to let me take their picture and now it is getting them to calm down and relax a little bit and not be too tense" — I need the opposite kind of help, with getting revved up!