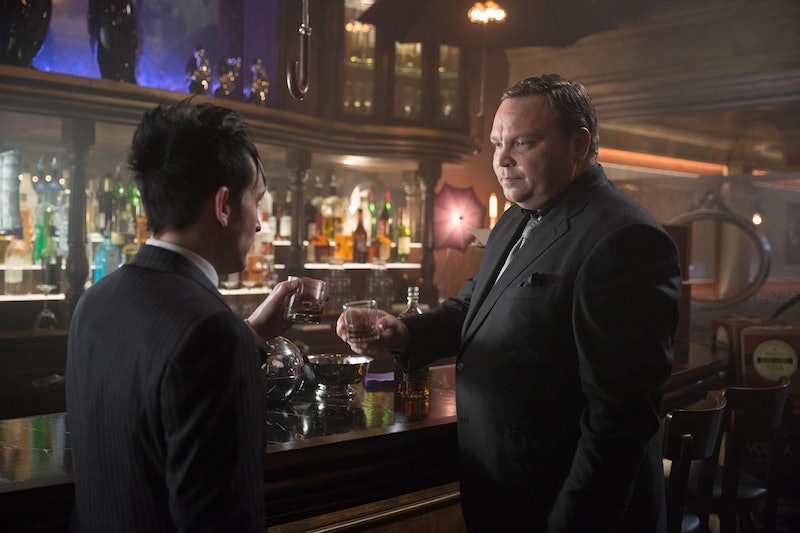 The most disturbing part of the "Blind Fortune Teller" episode of Gotham wasn't the introduction of Jerome, the possible future Joker, but the reveal that Fish Mooney's most loyal henchman, Butch Gilzean, was hypnotized by Victor Zsasz and turned into Oswald Cobblepot's new lapdog and protector. According to Zsasz, this was done on Falcone's request, and Falcone must know that Maroni is starting to breathe down Penguin's neck, so they need the best bodyguard in Gotham City to keep Cobblepot safe. But I'm hoping that it turns out not even Zsasz could break Butch and he's just doing the world's best fake brainwashing impression.

Butch seems to be back to his old self in the the clip below released in advance of the "Red Hood" episode. He's not talking like a robot or staring off into the distance anymore. Maybe that's just because Drew Powell didn't want to bother with that in his performance in the upcoming episodes, but I'm hoping it's really due to Butch's plan including winning the Penguin back to Fish Mooney's side. At one point in the episode trailer, Penguin wistfully says "Do you miss [Fish]? I do," furthering my little theory that Butch is working this situation and manipulating Oswald like a charm.

I mean, normally I'd expect Butch to be punching his way out of the club, putting Falcone in a full body cast, and strong arming his way into that prison where Fish is being held. Then the two of them would jump into a classic convertible and drive back to Gotham City, carrying shotguns and intimidating everyone into letting them take over Gotham's entire criminal underworld. Then they'd take over Penguin's pathetic club and turn it into the most popular nightclub in the city and miraculously Liza is still alive and treats everyone to very slow and kind of boring Siouxsie Sioux covers. And then they clink two champagne glasses together.

OK, I promise: I will not write any more Butch and Fish friend fiction (...in this article).

But seriously, it's so much more interesting if Butch has a secret plan that he's not telling yet. After all, this is the guy who literally killed his childhood best friend in order to make things easier for Fish after she took over for Falcone. Which never even happened, by the way. That's the level of his dedication. Excuse me if I find it hard to believe that he's totally given up on our girl Fish.