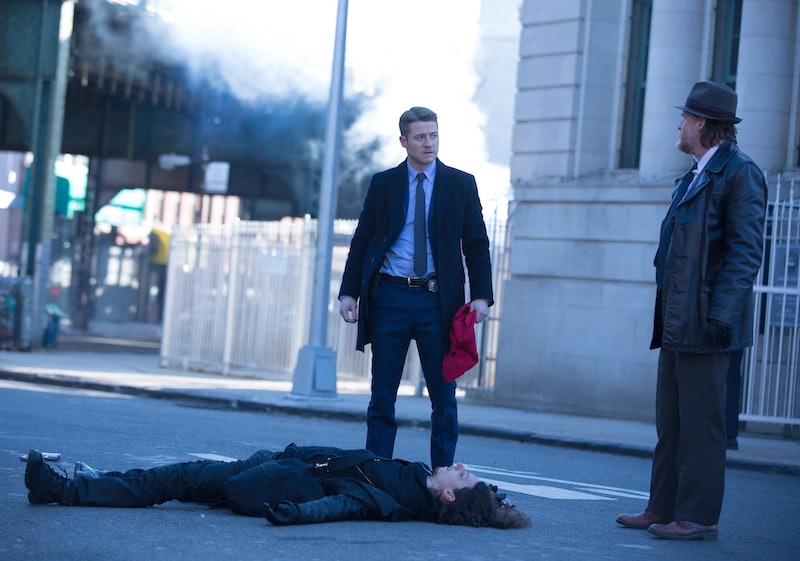 Even though the big news was that they were finally going to introduce the Joker to Gotham City, most of the episode "The Blind Fortune Teller" was spent on the inner workings of Haly's Circus. But turns out after removing the highly destructive "Jerome," they were free to move on and travel to another city, and next up, Gordon and Bullock will be trying to find out who is the Red Hood, a masked criminal who will be robbing banks.

Jerome murdered his own mother because, in his words, she shouldn't have "nagged" him to do his chores while having sex in the other room. While having to hear your mom hooking up with a clown is pretty rough, clearly Jerome's suffered some kind of psychotic break, because as soon as Gordon was able to piece together that he was guilty, he went from innocent teen to remorseless monster in a millisecond. And the results were absolutely terrifying. Cameron Monaghan may not officially be playing the Joker yet, but he certainly has the laugh and the smile down. In certain comic storylines, Joker becomes "The Red Hood," an early alias that references how he became deformed.

In the book, The Killing Joke, "Red Hood" is an extra, unrelated accomplice to a crime who is set up as the mastermind, then abandoned by the real criminals. When Joker took on a job as a "Red Hood," he ended up getting pushed into a vat of chemicals, and woke up with a big grin and an obsession with making the world suffer. Now Jerome already seems pretty far gone, so I'm terrified to see what he looks like after falling into some green stuff.

Instead of immediately running and hiding underneath their blankets, somehow Gordon & Thompkins, who teamed up this week to solve the case, even managed to have a sweet moment after Jerome confessed to the murder and proved just how scary even a young Joker can be. Hopefully they're not too scared to pull off the Red Hood and see who's underneath of it.