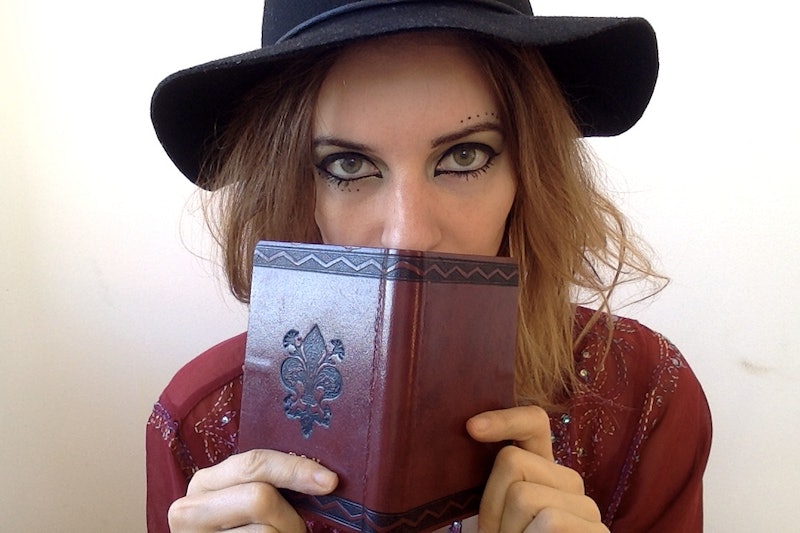 I've been a fairy, I've been a vampire, I've been a rolling stone, but today it's time to get in touch with my truly primordial feminine self and transform into something both beautiful and horrifying (those two adjectives are, incidentally, everything I strive for in a self portrait)... the witch.

Witches, both good and bad, populate the history of every country in the world. They are mostly, but not exclusively, women, and while on the one hand they can symbolize horror and evil, they can also symbolize healing, nurturing, creating, being in touch with nature, and so on. Point being, there are worse costumes for a gal to pick come Halloween.

As I started collecting inspirational images, I found myself drawn to the witches that were simultaneously feminine, intimidating, and otherworldly; if I had the resources, I would have absolutely imitated this witchy couture look. Call it vanity, but I wasn't really feeling that whole fake-hooked-nose-with-warts thing. Fine, I'll admit it: I wanted to be a sexy witch. Burn me at the stake and label my ashes "cliche."

1. First things first, I gave myself two green eyes. Not a good look on its own, unless you're into jaundice-chic.

2. Tired of denying my darker desires (is that a line from Twilight?), I took a quick plunge into the dark arts with a serious cat eye. Yes, it took me like seven minutes! I don't want to talk about it.

3. But there was still something so ordinary about a regular cat-eye, even if it was pretty intense for day-to-day wear. So I witched it up with black brows and drawn-on lower lashes.

4. Naturally, I needed a hideous wart. And some glamorous lipstick. (My evil secret: Black over the entire lip, and then dark red dabbed in the middle.)

Make sure to draw attention to your imperfections whenever possible. If someone dares to comment, smite them down.

5. It's time for the final transformation. Every witch needs her mysterious symbols, so I went a little wild with black eyeliner. And witches are known for their wild, flowing, unbrushed/unshampooed/unconditioned locks, which is right up my alley, so I let my hair down.

Channeling our witchy queen of pop, Gaga herself.

I also found that I suddenly knew the three commandments of witchdom, as though they'd been with me from the beginning of time:

2. Always have a book of spells on hand.