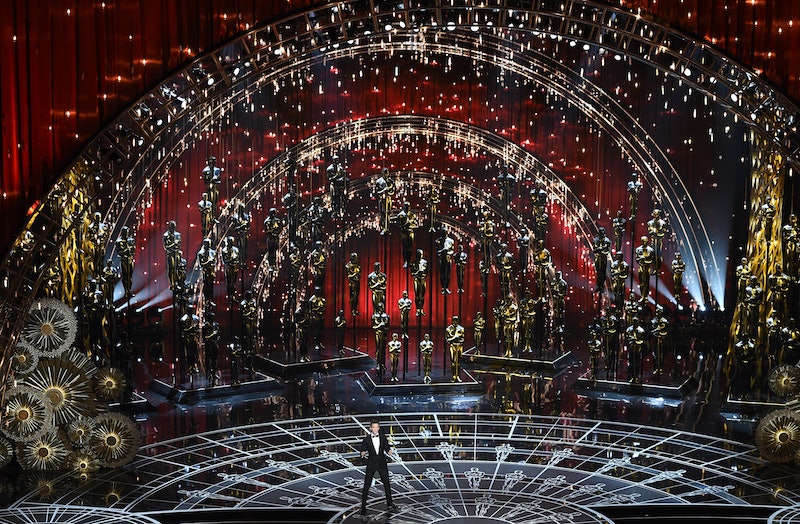 Oh, the Oscars. Such glamour. Such class. And so many awkward moments. It's a fact of life (and award season): You can't possibly expect to get this many celebrities in one room and expect nothing awkward to happen, especially when so many of them are giving acceptance speeches on the fly and wearing shoes that are probably pretty uncomfortable. Even the most lauded of celebrities must feel a little out of their element, and it definitely shows. It's just the way these events go — even events like this one, where all of Hollywood is supposed to be on their best behavior as Neil Patrick Harris flawlessly (hopefully) keeps the night moving. And this year, the 2015 Oscars definitely didn't let us down.

Because honestly, why watch the Oscars if not in anticipation of all the awkward things that are going to happen? It's a long show, and if you're like me and have the attention span of a toddler, it tends to get a little boring. Moments like John Travolta inexplicably calling Idina Menzel Adele Dazeem and Jennifer Lawrence tripping up the Oscars stairs are what keeps the audience awake, and trust me — this year's Oscars had plenty of those.

As in American Sniper. Harris was pretty pleased with himself, but the audience wasn't laughing like he'd hoped they would be, and I kind of wanted to crawl in a hole out of secondhand awkwardness.

I mean, of course it was in the context of Tegan and Sara performing "Everything is Awesome" with The Lonely Island from The Lego Movie, but it's apparent Oprah has never held anything made of Legos in her life.

This is only awkward because all of us at home were hoping she'd say Dick Poop.

Come on, Harris. Not only were these predictions not actually predictions you made before the Oscars, but they were also not funny. Maybe it's because it was midnight by the time he got around to this particular magic trick, but I was not impressed. And I had such high hopes!