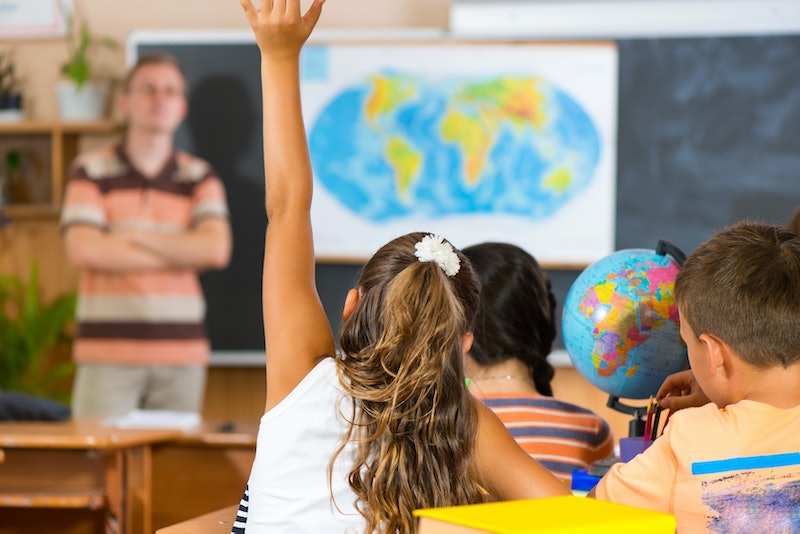 Once again, science has confirmed something that we've all suspected at one point or another: teachers think their favorite students are smarter than their other students. If you're nodding to yourself and feeling vindicated, you were probably on the wrong end of this phenomenon. If you're looking back on your school career and wondering what on earth I'm talking about, you were probably a teacher's pet and didn't even realize it. Nerd.The German study looked at 93 teachers and their 294 eighth-grade students, NPR reports. First, everyone took a basic personality test, after which reading and math tests were administered to the students. (The test questions were shown to the teachers as well, although they didn't take the test.) After the students finished, teachers were asked two questions: one asked how the teacher thought the student compared to his or her peers, and the other simply asked how well the teacher thought the student performed on the test. Basically, the first was a "global judgment" and the other a "task-specific judgment," as NPR put it. Unsurprisingly, the study found that the more similar in personality a student was to the teacher, the higher the teacher rated his or her abilities.

The effect didn't apply to the task-specific judgment, however, so the teachers could accurately estimate students' performances on specific tests. It's just their estimation of students' overall abilities that's affected by how much they like them. In other words, two students could have the same score on a test, but if the teacher likes one more than the other, he or she may think that kid is smarter. Yikes.

Don't take this to mean that a students' score is safe from bias, though; teachers are far from the nondiscriminatory grading machines we'd like to think they are. Just look at the Israeli study, published just last month, that showed that girls scored worse than boys on math tests only when the teachers who graded the tests knew their gender. NPR also makes an excellent point that this study also has disturbing implications for minority students. As of 2012, 82 percent of public school teachers were white according to the National Center for Education Statistics. What does this mean for the 48 percent of students who are minorities in the United States, who are being taught by a teacher who may be biased toward students who look and think like them?

This isn't to say that teachers are deliberately failing students who aren't like them. Unconscious biases are part of human nature. However, this study does highlight the importance of recognizing biases and making an effort to combat them. Co-author Tobias Rausch told NPR that one way to do so is by making sure to include standardized tests, as well as "raising teachers' awareness concerning the way they assess their students' competencies." Standardized tests have their own pitfalls, but like most things, it looks like education is best when teachers use a combination of strategies.

But let's look on the bright side! Now you know that if you or your child isn't doing well in a class, just dress up like the teacher. I'm not saying showing up in a tartan sweater vest and fake mustache will get you an A in calculus, but weirder things have happened!