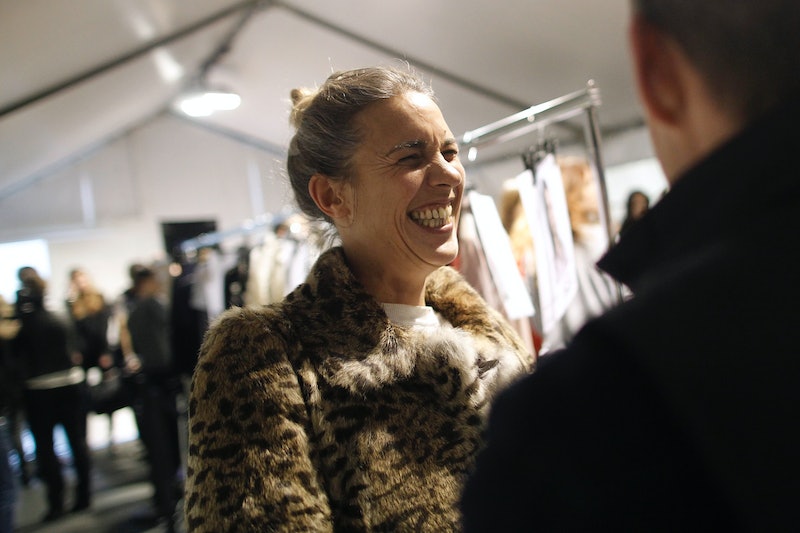 There's pretty much nothing not to love about French designer Isabel Marant, but about a million things that help one understand why she's one of the most beloved women in contemporary fashion. She's the inventor of the original wedge sneaker — who eventually announced that she'd stopped wearing them because they were over. She relishes in the contradiction of calling herself anti-consumerist. She never wears makeup and her hair is usually in a tousled, haphazard bun. She calls out her copycats and denounces knock-offs as vulgar. She's also the fashion designer who doesn't consider her life's work to be classified as fashion (as she said in an interview for Barney's New York's debut issue of The Window in Print). It actually makes a lot of sense, then, that Marant is the designer of choice for the women who've always looked casually, effortlessly put together and the chicest "It Girls" alike. So why doesn't she consider her gorgeous, seemingly worn-in staples "fashion?"

In Marant's opinion, fashion is hard to wear in "real life" and designed to be precious and not practical: “When I was studying fashion, I had a very brilliant teacher who told us that you should never design something that you wouldn’t wear yourself,” she told the reporter. “I’m doing everything with my heart and all my soul,” Marant says. “Everything is really coming from me. I think that’s what keeps it together... it’s coming from the spirit of one person." In a world obsessed with a romanticized, reduced, stereotyped monolith of "The French Woman" — who allegedly embodies every appealing character trait that American women apparently do not possess — the appeal of Marant's clothing makes sense: She is the embodiment of graceful minimalism and feminine-leaning androgyny. She is her own muse, after all.

I am actually of the opinion that if you asked Marant about the "French Woman Industry," she'd probably hate it. The designer is not a one-dimensional cliche, but rather a dynamic woman who is designing clothes for the everyday life of all types of women — and her clothes are nothing if not thoughtful and easy to wear. "Someone once told me a very nice compliment: She said that for her, my clothes were like old friends," Marant says. I like the way her brain works and I can definitely get behind this ethos: Clothes are friends and fashion is really "just getting dressed." While I appreciate concept collections, everything about Kanye West, the planet Karl Lagerfeld is living on, and very intentional lifestyle brands, there's just something refreshingly simple about the idea of dressing like the best version of yourself.