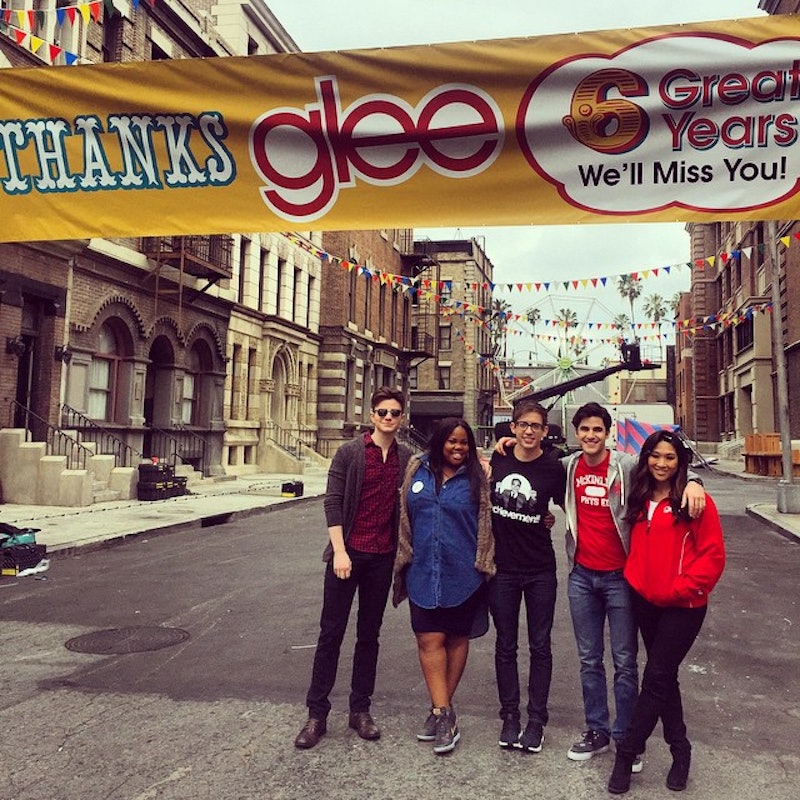 If you’re a Glee fan, it was probably a wise decision to have hibernated this winter (to avoid the snow and bitter cold) and to perpetuate our unending denial that the show is going to meet its maker on March 20th.You see, the denial thing is getting harder, because on Saturday, the show wrapped filming and the Glee cast got all kinds of sentimental. Who can blame them, though? We’ve been watching for 6 seasons but they’ve been living it for nearly seven years. Almost a decade full of memories is a whole lot to let go of. So, instead of truly letting go of the set and each other, they did what any good millennial would in this day and age — they posted about it on social media. Because obviously the internet is forever.

Listen, we’ve all been reduced to blubbering fools from time to time, right? Well, as you scroll through the casts snaps of their last day as official Glee club members, it might be one of those times. Hell, I know it was for me. It’s sort of sobering to know that a show many of us, including the cast, grew up with is coming to an end. So, if you’re a masochist or if you’re feeling particularly sappy, check out the pictures below from Lima’s finest citizens to reflect along with them.

As Mr. Schue would say: From the top!

Quickly Escorting Myself Out Of The Room To Get Kleenex...

Sorry, Even A Carnival Isn't Going To Quell This Moroseness

Alright, I Take That Back — This Does Look Pretty Fun

At Least They're Getting A Proper Sendoff

WAIT, I Spoke Too Soon. How Could We Forget?

How Does Everyone Still Look Good In The Middle Of Getting Made Up?

I'M NOT CRYING, YOU ARE!

We Feel That, Amber

STOP WITH THE SADS, GUYS

What's That Sound? Oh, Just Our Souls Getting Sucked Into A Deep Black Hole

I Never Thought A Bunch Of Empty Seats Could Make Me Feel So, Well, Empty

So long, Glee cast. It's been really real.