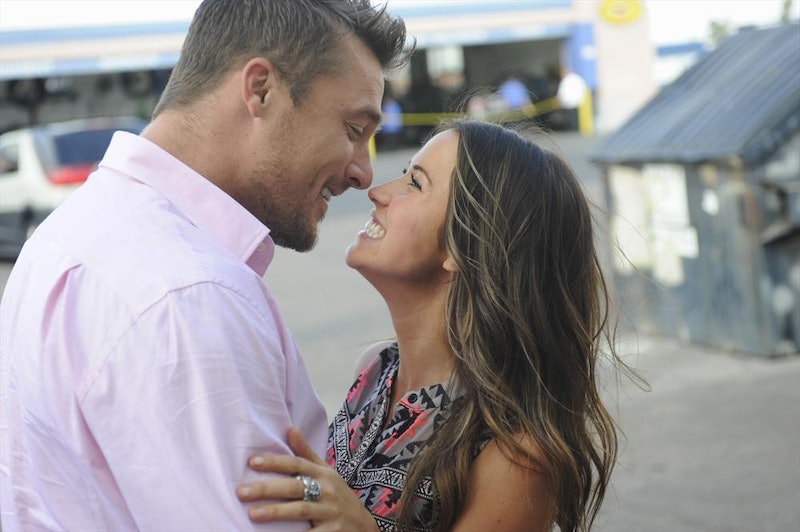 The Bachelor's Kaitlyn is a big (little) ol' weirdo and she's kind of our only hope at a reasonable Bachelorette in the next season. Chris' season has turned out to be pretty bonkers, and as much as I've enjoyed all the mayhem, it's meant that no one woman has stood out as much more likable than the next... except Kaitlyn. She takes a while to grow on you, especially after her aggressive limo introduction — "You can plow the [bleep] out of my field any day" — but the girl is funny, and someone you could imagine watching The Bachelor with, rather than the usual woman who goes on the show to find love. (Besides, it's kind of a given that Kaitlyn is not going to win The Bachelor.)

At first, Kaitlyn made me a little nervous because even though I would never go on The Bachelor, I always wonder how I would behave if I did; and after seeing Kaitlyn, I now know that that would be me. Kaitlyn's default setting is humor, which means that it kicks into high gear when she's nervous, wanting to difuse tension, or making a first impression. That means we got a lot of high intensity Kaitlyn in the first few episodes. But once she settled in a little, it became clear that she was not only funny, but laid back, down for anything (who else would have been that cool with that Costco date?), and a crowd pleaser. All the other women seem to love her. And, even in the beginning, she put being herself first over impressing Chris: I mean, this is the woman who told Prince Farming that he has a tinkly little lady laugh on their first date.

I appreciate that about Kaitlyn: She misses the mark sometimes, but she has it in her to be really, genuinely funny. Think back to Andi, Sean, Des, and (gah) Ben; these have all been people who could hold their own as the head Bachelor(ette) in charge, but who was the last one that was truly entertaining?

She Could Really Get Some Use Out of The Show

One thing that's made Chris' season surprisingly compelling is the slow reveal that Chris' fears about love are pretty warranted: Not only would it be impossible for him to meet someone where he lives, but it would take a very special woman to be willing to settle down in Arlington, Iowa. Kaitlyn has proved over the course of the season to not only be the type of woman whose wit might be intimidating to potential suitors, but she's also been scarred by past relationships. She's has trouble letting her guard down with Chris, but being in charge of the proceedings with 25 bros to mess with, The Bachelorette may be just the gig Kaitlyn needs to find her partner in crime.

Sometimes on new seasons of The Bachelorette, the guys don't seem to know who to expect, and in some of the biggest tarnishes on this franchise's past, some men are disappointed because they thought The Bachelorette would be someone else. But with Chris and all of his Iowa needs out on the table, it seems that all of the women knew Chris' deal going into the show. I would hope the same would be true for Kaitlyn and the type of man her unique personality might draw. Let's put all those, "I like a girl with good sense of humor" dudes to the test. Here she is! It also helps that Kaitlyn is gorgeous, but I'd love to see a group of good humored bros all trying to keep up with Kaitlyn. Or better yet, some shy bros who she has to bring out of their shells and then they totally fall in love. This (fantasy) season is going to be great!

She's Actually Into the Process, I Guess

The problem with cool contestants like, say, Sharleen, is that they often seem a little too above the process. Once they get in there, they know this process is way too weird, and eventually they have to get out to save themselves. But although Kaitlyn seemed a little too cool for school in the first few episodes, she hasn't questioned the ridiculous nature of The Bachelor's process. It's actually proved to help her bring her guard down and seemingly really fall for Chris.

And despite her confidence and quick wit, she's always nice to the other women, even when they're saying she doesn't deserve a rose in front of her face — *cough* Britt *cough*. Kaitlyn is a shower and a grower: I've liked her more and more with each episode, and if given the opportunity to put 25 men in their place from her powerful five-foot stance, Kaitlyn could just be the best Bachelorette ever.