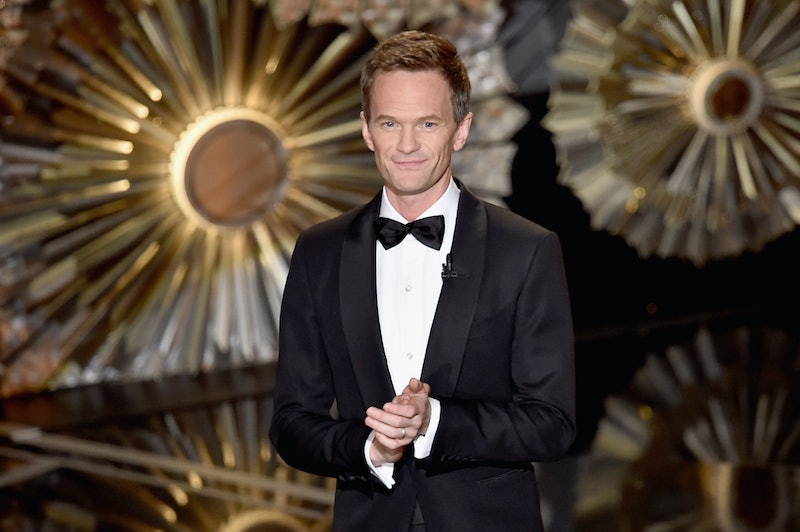 And the award for the most ballsy host goes to... Neil Patrick Harris. Though the Oscars host opened the 87th Academy Awards with a very expected (but no less entertaining) song-and-dance number, the also took a jab at this year's high-criticized and controversial group of nominees before the music even began. Yes, a white host, presiding over a very white Oscars, Neil Patrick Harris joked about the Oscars' lack of diversity with his very first line of the show: "Tonight we honor Hollywood's best and whitest — sorry, brightest."

Of course, the quip wasn't entirely unexpected. After all, the Academy Awards' issue with diversity — in lieu of the very notable snub of Selma in every category but two, and the fact that the 2015 nominees are the whitest in 17 years — is the elephant in the Dolby Theater in 2015. (Of course, it certainly doesn't help matters that 94 percent of the voters for the Academy Awards are white, and 77 percent male.) But anyone who follows Harris' Twitter could also predict that the man formerly known as Barney Stinson would have mocked the lack of diversity at the Oscars. At the 87th Academy Awards Nominees Luncheon at the Beverly Hilton in early February, Harris tweeted the following:

Will it be the last time this year's Oscars reference its errors this year? Likely not — after all, the three-hour ceremony comes complete with plenty of jokes, and plenty of outspoken celebrities. But not that anyone could complain about chatter — conversation about the Oscars' problem with diversity is the only way we could possibly see more inclusion in the future. Because, it's 2015, people. We really should be doing better than this. So let's keep talking.