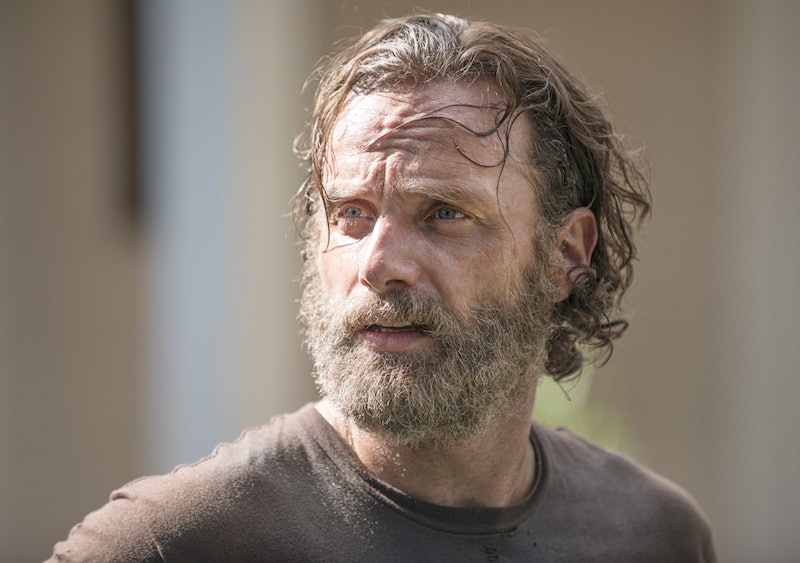 Following the shocking death in the show's midseason premiere,The Walking Dead took things down a notch in last week's episode (way, WAY down a notch, to be specific), but thankfully we got to see two pretty important things. First, Rick finally uttered the "We are the walking dead" line (*cheers for 10 hours straight*), and second, Aaron made his big arrival. In this week's episode, "The Distance," there was yet another big reveal of a much-hyped-about theory: The Alexandria Safe-Zone is coming to The Walking Dead, y'all.

After Aaron rolled up to camp and there was the requisite amount of time spent wondering, "Can we trust this kind, handsome Lands End model, or is he The Governor 2.0?" the gang all agreed they had no other choice but to take his word and go to his mysterious community since 1) they're starving, 2) they're dangerously dehydrated, 3) and as Daryl eloquently pointed out, they're living in a barn that "smells like horses**t."

As usual, Rick was the definition of skeptical, but Aaron proved to be the real deal when everything he said about where his cars were located and the number of people he was traveling with (one - Eric!) proved true. They agreed to go to Aaron's community, which he finally named as "Alexandria," and seems to have everything from "a gifted surgeon named Pete" to enough space to keep Judith safe from any walkers. Is it too good to be true, or have they all found an actual place to call home?

The sound of children playing behind the intimidating Alexandria gate we got to briefly hear at the end of 'The Distance' is a good sign, but this isn't the first time this show has pulled a bait and switch. We'll all just have to wait and see.

More like this
Michael & Kathleen Peterson’s House From ‘The Staircase’ Has New Owners
By Kadin Burnett and Kayla Blanton
'Heartstopper's Joe Locke Isn’t Here For The Speculation Over Kit Connor’s Sexuality
By Nola Ojomu
Where Is Allan Gore Now? The ‘Candy’ Subject Moved On Shortly After Betty’s Death
By Gretchen Smail
Hilary Duff Spills The Tea On Why Disney+ Canceled The 'Lizzie McGuire' Reboot
By Jake Viswanath
Get Even More From Bustle — Sign Up For The Newsletter