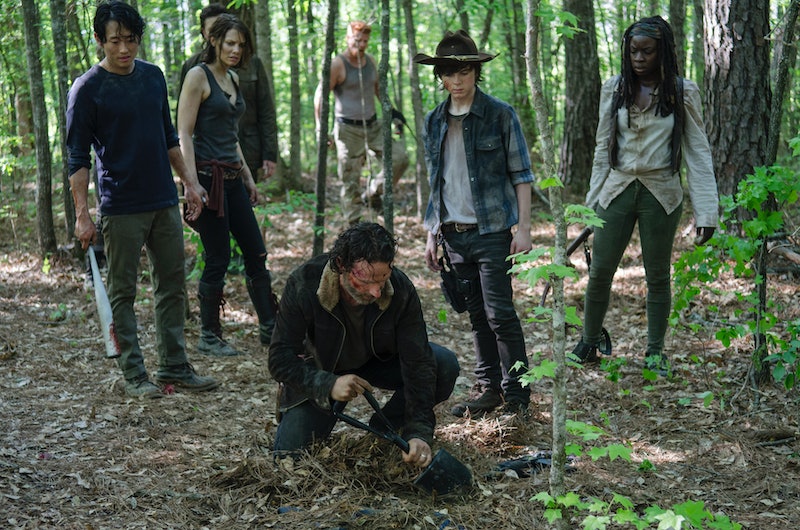 I am so pumped after The Walking Dead season premiere, aren't you? Terminus went up in flames. Carol was walking around like some kinda Jedi, rescuing her friends as if Jabba the Hutt was holding them. There was hugging! So much hugging. Everything's coming up The Walking Dead this week. Even Morgan is back! I love that Morgan is still a character on this show. It makes up for all the times Rick was trying to leave voicemails on a walkie talkie. That's not how those work, dude! Next week's episode is shaping up to be just as exciting. We still don't know where Beth is, but we are promised a familiar location from the comic books. Now, signs point to this new Walking Dead location being the Alexandria Safe-Zone, but remember what happens when we follow signs on The Walking Dead? We end up at Terminus which is NO SANCTUARY. Plus, unless we're planning a time jump, I don't think this crew can walk from Georgia to Virginia in just a couple of days. So it's good to keep an open mind. If "The Grimes Bunch" doesn't end up in Alexandria next, where could they be stopping? Using context clues and comics clues, I have a few contenders.

To me, the most likely place that the group will visit, and maybe spend a bit of time. Father Gabriel Stokes barricaded himself in his church out of cowardice, and the location was later seized by a group called The Hunters. It's difficult to judge time on this series, with a relatively short episode order and folks having to walk everywhere. But since Seth Gilliam's character will debut in the second episode of the season, we're likely to see his church. In the comic books, the group stays there for a while on the way to Washington DC.

Another location that the main characters visit on their way to our nation's capital, this base was a large estate before the outbreak. The Hunters are the cannibals that a lot of Season 5 spoilers have been hinting towards. It's likely that they are connected to the "butchers" who, according to Mary and seen in that spooky scary flashback, took over Terminus. Rick seemed pretty intent on destroying every last inhabitant of that murder station once they escaped in the season premiere. Since a similar massacre occurred in the comics at The Hunters Base, this is a possible location that the AMC series will visit as well.

This settlement as also known as "The Sanctuary". Which is pretty suspicious, after all that Terminus speculation. The Saviors are a polygamist cult group. We've seen two new groups in the episode and trailers thus far. Neither of them seems particularly religious. Now, that candle-lit room that Mary and Carol had their confrontation in seemed to be a type of worship space. However, I'm not getting that cult vibe from them in the religious or amorous sense. They seemed much too business like. The only way this location will be visited next on the series is if, like The Hunters' Base, it is connected to Terminus and part of Rick's mission to take them out.

Another option, since it was built on a factory, is that this is the "hospital" where Beth is being held. We don't know much about that place except their Utilitarian philosophy. But the few seconds we saw in the trailer pointed to Beth being held in a building that was tall or deep enough to not be able to see the bottom of the elevator shaft.

This is maybe my favorite idea for an apocalyptic colony. When zombies attack, you know where to find me. The Kingdom was created out of an abandoned High School. How fun, right? They made a barrier out of school buses. So smart. Their leader, Ezekiel, has a pet tiger . How did that happen? Was the tiger a zoo animal? What other foreign animal acquisitions are roaming the landscape? This is such a cool implication of the world created by The Walking Dead! The comic books don't spend too much time at The Kingdom, so there's only a slim possibility that they'd drum up and anticipation about it on the television series. I'm just wishful thinking. Let me have this, okay?

The final contender for where The Walking Dead will take us next is adjacent to the Alexandria Safe-Zone — a farming community called the "Hilltop Colony". Getting into the history of this location may included a few too many spoilers, so I'll say this. If Rick, Michonne, Darryl and the others were to come upon the Hilltop Colony in the next episode, it would solidify a direction the the show was taking. It would also not mean that they'd have to stay there for an extended period of time. This is the type of place that you can go back and forth to, unlike other places the survivors have encountered. They are also connected to The Saviors. If it is The Saviors that Terminus' "Butchers" are meant to be instead of The Hunters, then Hilltop is sure to play a part. (Personally, I think they are supposed to be a mash-up of both groups that takes the cannibalism from The Hunters and the mafia techniques from The Saviors. The fact that we flashed back to Terminus after blowing it up means those creepsters aren't going anywhere.)

In conclusion, if we are looking at The Walking Dead's end game, it would not be unheard of to get our first glimpse of Hilltop at this juncture.