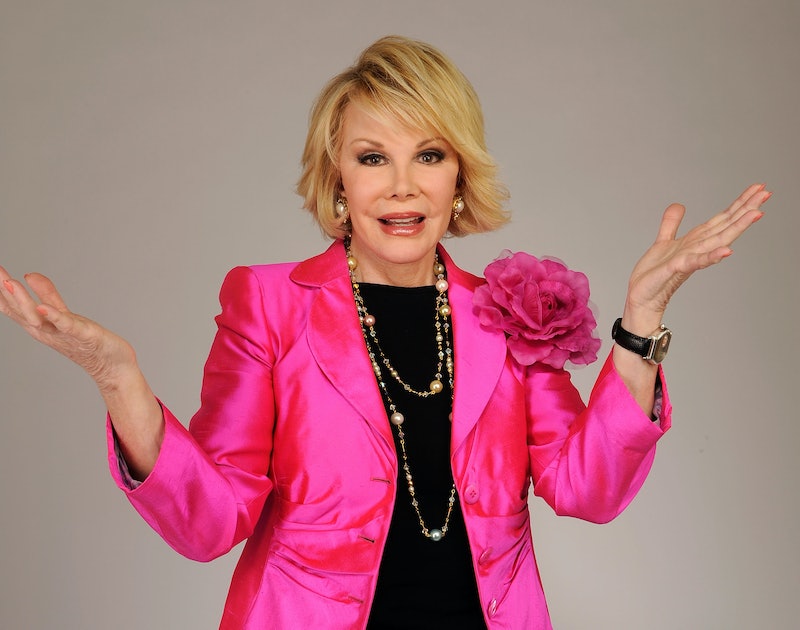 When Joan Rivers passed away in 2014, the world lost a whole lot of laughter. Although she was a controversial and polarizing figure while she was alive, even the most passionate Rivers naysayer was forced to admit that the circumstances of her death were incredibly tragic and a harsh blow to the family and friends that loved her so. With Kathy Griffin taking over as Fashion Police host, and almost six months between us and the date of Rivers' death, it seems like an incredible fact that stars as bright as the comedienne's burn out and the world manages to go on regardless. However, many people's worlds came to a halt on Sunday night when the Oscars left Rivers out of their In Memoriam montage. While the Internet was in a rage over the snub, The Academy responded to the backlash over Rivers' absence — but their explanation was more than a little unsatisfactory.

In a statement to The Hollywood Reporter, an Oscars rep had this to say: "Joan Rivers is among the many worthy artists and filmmakers we were unfortunately unable to feature in the In Memoriam segment of this year's Oscar show. She is, however, included in our In Memoriam gallery on Oscar.com."

I don't think I'm the only one who can see right away that this explanation isn't actually an explanation at all. It essentially says, "Joan Rivers should have been in it, but she wasn't, so we put her online." That's it. That's the whole statement. Bustle writer Kelsea Stahler did more to track down the reason Rivers and others were snubbed in the Oscars montage than the Academy did in this paltry effort to clear things up. The only thing this clears up is that the Academy could have featured Rivers during the montage, but actively decided against it for some reason — something that is likely to incur more wrath against them than less.

Yes, it's nice that Rivers was included in the online gallery, but the online gallery is not where people wanted to see her honored. The online gallery should have been an additional honor, not the sole honor that the comedienne received. Rivers' death affected more people than simply those who knew they would be affected if the comedienne ever died, affected more than just her fans or her family or her friends, and it seems, at least to us, a no-brainer that she should have been honored during the broadcast. The Oscars are incredibly prestigious, which makes their snub of Rivers all the more egregious. Sure, she wasn't the only star who was snubbed by the montage, but she is the first name that people call to mind that should have been included. And that says a lot.

So, if the Academy couldn't include Rivers in their montage, then I need a better explanation as to why exactly that happened. Were there In Memoriam montage rules that excluded Rivers and the other stars who were snubbed from qualifying for it? Were there other factors at play that the public is unaware of? Now would be the time for the Academy to admit to such a things, because the former would make a better excuse for the snub that the people would accept. This statement that they released is so unsatisfactory that I wouldn't be surprise to hear that it has sparked new controversy. I can't imagine more than a few people would genuinely be mollified by Rivers being honored on the web while everyone was tuning in to the award ceremony broadcast itself.

More like this
Remember When Benedict Cumberbatch Announced His Engagement In A Newspaper Ad?
By Hugh McIntyre
Tom Cruise Gives His Honest Review Of Lady Gaga’s New Song For 'Top Gun: Maverick'
By Hugh McIntyre
Rebekah Vardy & Coleen Rooney’s Trial Has Officially Begun
By Bustle UK
Prince Harry & Meghan Will Attend The Queen’s Platinum Jubilee With Their Children
By Sam Ramsden
Get Even More From Bustle — Sign Up For The Newsletter