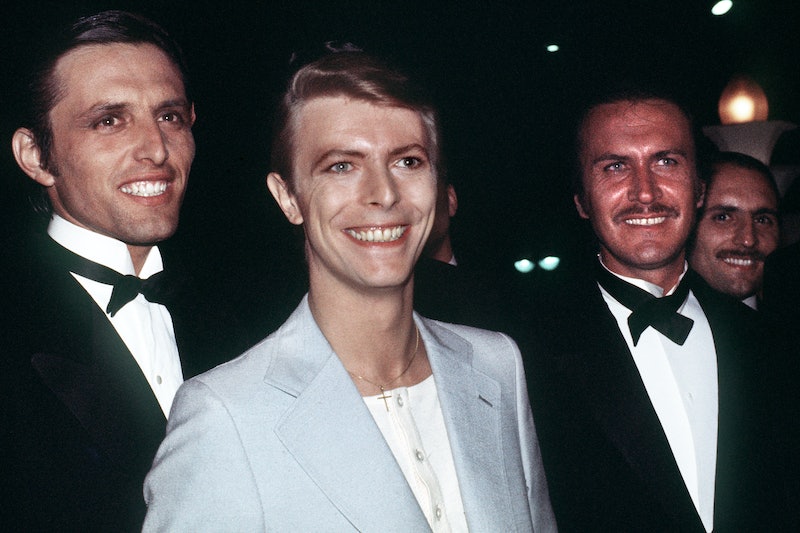 If you've ever been at a loss to describe David Bowie's long and dynamic career (and honestly, who could blame you? There's so much to cover, and so much of it genuinely feels inexplicable and incomparable.), then this video is for you. Going beyond the standard, "Well I guess he fell down from space, liked what he saw, and then stuck around to make some awesome music," this one minute video spans Bowie's entire career, from his forgotten beginning as a novelty song writer to now, with every phase in between, including both "Aladdin Sane" and "Aladdin Sane With Dog Legs". What you mostly need to know though is that at most stages of his career, David Bowie was always a "[Something] [Something] Sexy Alien."

The one-shot video is perfectly executed, with Bowie quickly traveling through time with the help of costume-changing extras, ensuring he goes from the "'80s Scary Clown Bowie" to "Strangled Balls Bowie" in Labyrinth. My one issue: When the video reaches the '80s, it calls "Let's Dance" "Cheesy Synth-Pop, not "One Of the Best Songs To Ever Lose Your Mind To On The Dance Floor", which it what it actually is. The nerve. Regardless, the video does a pretty solid job of summing it all up, so if you feel like you need some clarification on the various eras on David Bowie's career (with only a teeny bit of editorializing) look no further:

There are, however, some notable major David Bowie life moments they left out:

4. That weird Nazi phase (the video mentions the Thin White Duke is a creepy weirdo, but not the extent of it!)