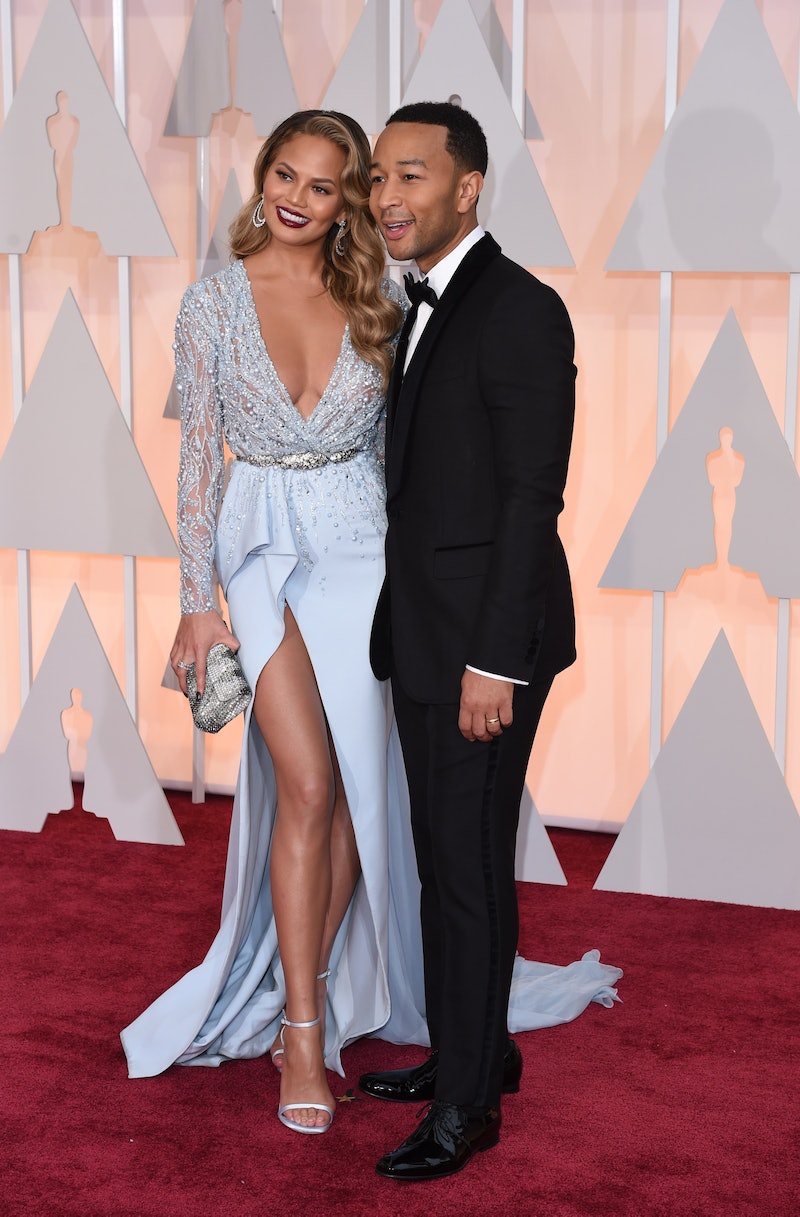 The Academy Awards are not just about the actors and directors. Singer John Legend is now an Oscar winner for his song with Common, "Glory", from the Selma soundtrack. This nomination and win made the Oscars a major night in Legend's life and career. So, of course, Legend brought along his wife Chrissy Teigen to the award show as his date. And as usual the couple made us all jealous because John Legend and Chrissy Teigen had the best Oscar night ever. They did it all right. They looked amazing, won awards, gave speeches, performed on stage, posted Instagrams, posed for photos, and had the most fun out of everyone ever.

These two always steal the show by having the best time anywhere they go. They were the true gems of award show season in 2015. So much so that it makes me sad that it's all over until next year. Nevertheless, I am sure that the Teigen/Legend super couple will be making other appearances at celebrity events soon. And, of course, they will be soaking up the spotlight and making everything way better because they are the most fun couple in the world. The hashtag #RelationshipGoals has never been more applicable than it was to Sunday night's Academy Awards. Why did they have such a great night?

Legend looked dapper in his suit, but his Teigen really turned heads in her dress. She looked absolutely stunning in her low cut Zuhair Murad gown with its extremely high slit. Their appearance on the red carpet was the perfect way to start out the night.

Legend and Teigen got silly at the Oscars security check-in. It seems like these two are always cracking jokes and laughing — even at a serious event like the Academy Awards.

Maybe they were just trying to calm Legend's nerves before he had to perform and wait for the winner in his category. Whatever is happening here, Teigen's belt seemed to do the trick since Legend absolutely slayed the performance and won in his category. This belt could have been his good luck charm?

The Oscars are such a serious affair, but Teigen and Legend know how to have fun everywhere they go. Teigen posted a video of the "Everything Is Awesome" performance that also included reaction faces and dancing from the couple. They really do turn everything into a party.

Legend and Common amazed everyone with their incredible performance of "Glory." It was so powerful that it brought pretty much everyone to tears including David Oyelowo, Oprah Winfrey, Chris Pine, and even the performers themselves.

After the performance, "Glory" won the Academy Award for Best Original Song. Common and Legend delivered a moving and inspiring acceptance speech that emphasized that "Glory" is more than just a beautiful song; it has important themes about freedom and justice.

I am not sure what's going on here, but Teigen rocked this costume mask along with her Oscars gown.

Teigen changed into another gown for an after-party and Legend acquired a new accessory — an Academy Award. The couple looks beyond elated lounging next to some pink flowers to celebrate his win.

The perfect ending to the best Oscar Night ever.

More like this
Remember When Benedict Cumberbatch Announced His Engagement In A Newspaper Ad?
By Hugh McIntyre
Tom Cruise Gives His Honest Review Of Lady Gaga’s New Song For 'Top Gun: Maverick'
By Hugh McIntyre
Doja Cat Wore Surrealist-Inspired Schiaparelli To The BBMAs
By Dominique Norman
Joe Alwyn Reacts To Taylor Swift Earning An NYU Doctorate In A Rare Interview
By Jake Viswanath and Nicole Pomarico
Get Even More From Bustle — Sign Up For The Newsletter