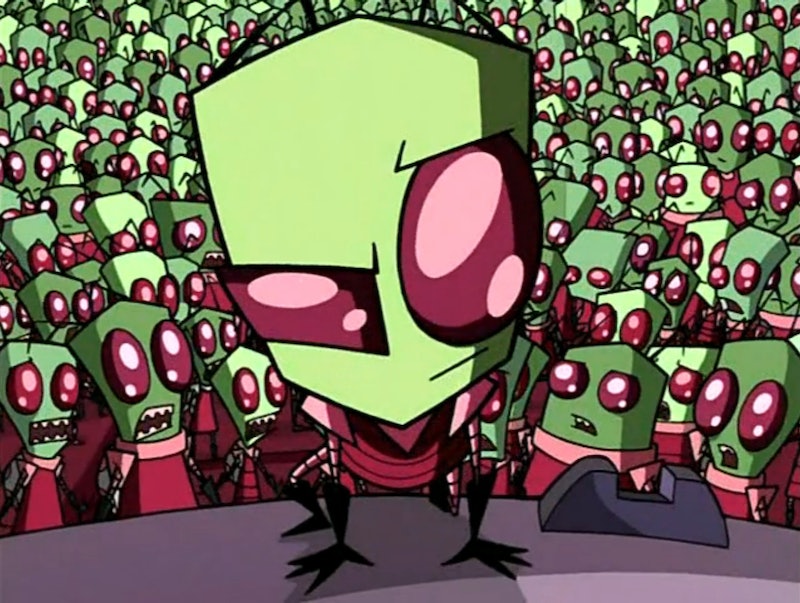 The nightmare returns. Your favorite short-lived cartoon from your mallgoth phase, Invader Zim , is finally coming back... as a comic. Creator Jhonen Vasquez confirmed that a new series is being developed by him and Nickelodeon, with the first issue debuting on July 1st. And I don't know about you, but I'm really excited to see how Invader Zim will traumatize a new generation.

Seriously, though, Invader Zim was a really dark cartoon, a factor that probably drove it into the a premature death, and that probably shaped some of our cynicism. Of course, if you're even lightly familiar with Vasquez's other work (and I was a goth kid in the early 2000's, so it was all I was familiar with) you know that Invader Zim's dark tone is quite literally child's play by comparison. Still, you can't deny that the series really put in some heavy, soul crushing messages between "The Doom Song" and all those rubber piggies. And I'd say that ala The Powerpuff Girls , they did a really good job of hiding adult lessons in a children's cartoon, but well... I'm pretty sure they were a bit more blatant in delivering the news that we were all doomed.

Anyway, I couldn't think of a better time to recap all those hard truths! Such as...

Somehow Zealously Overconfident People Manage To Succeed, In Spite Of Their Lack of Actual Talent

Zim is the least qualified of all the Invaders, to the point where his name is practically a punchline to Tallest Red and Tallest Purple. They basically send him on a mission as a joke, and he only gets to Earth by accident. As soon as he gets there he puts on the flimsiest of disguises (some blue contacts and a Richie Ricardo wig, essentially) and somehow manages to dupe the entire class into thinking he's human. Even when all his mannerisms are over exaggerated, and roughly 37 percent of his words come across mispronounced or yelped. Even when he doesn't have ears. You guys...

It just goes to show you the strength of Zim's belief. The delusions he holds about his self-importance and the overall quality of his work somehow are what keep him afloat. Not thriving, he never conquered Earth truly, but he always FELT like his successes were massive.

In some ways he's basically the Kanye West of aliens.

To be fair, Dib's crazed obsession of aliens was, well, pretty crazy and it seemingly always marked him as somewhat of an outsider. But this must have been especially frustrating when Zim showed up on the scene.

"Okay, am I the only one here who sees the alien sitting in class?" he asks, like the one guy acknowledging the emperor without clothes. And, yeah, it very clearly is. But the class is so completely done with Dib's shenanigans that his cries are utterly lost in the din, and so he has to spend the entire show trying to expose Zim's identity to the world.

And he sucks at it.

A truth so real in a world where our friendship is only truly validated if it's shared on Instagram. Nobody really has true friends on this show... Dib has his sister Gaz, and Zim has GIR, but beyond that "friendship" isn't really a theme on this show. It's used as a plot device once in "Besets Friend," in a terrifying way.

Basically Zim decides to fit in he should acquire a "friend," holding a competition between a slew of unpopular children. One of them, Keef, wins out, and they put on a little show of friendship. Once Keefs "services are no longer needed," however, he starts displaying an uneasy obsession with Zim. Long story short, this all ends with Keef getting his eyes ripped out and replaced by robot eyes. Um. #nonewfriends?

Even Your Most Incompetent Male Peers Get The Glory, And It's Practically Aneurysm-Inducing

Tak, perhaps the only known female Irken on the show, shows up at the end of the series, and she is amazing. Baffled by Zim's (unearned and kind of fake) title of an Invader, she decides to take over Zim's mission and conquer Earth, hopefully to show the Tallests that she's earned the title. That's right, Zim somehow can be an Invader (formally or not), but this stone cold badass has to prove herself. Criminal.

Gaz likewise deals with this bullshit in the show, especially in the last episode when she bails Dib out of Zim's clutches but fixing and commandeering Tak's ship. "I can't believe it! I finally fixed it! I'm actually flying in my own alien ship!" Dib squeals.

5. The World Is Actually A Terrible, Agonizing Place

This message came across in different venues, but I personally liked how Ms. Bitters, Dib and Zim's serpentine schoolmarm, served up those platitudes. In the Halloween special, Dib keeps experiencing terrifying nightmare hallucinations. He shows up to class out of breath, gasping, "Sorry... I'm late... horrible... nightmare visions..." and Ms. Bitters snaps, "It's called life, Dib. Sit down."

Appearances Are Deceiving, And There's Darkness Within The Most Innocuous Things

Oh, you really love GIR? You just thought he was adorable? Well you'll love this: there's a frame of GIR covered in blood spliced and hidden in at least the last 14 episodes of the series.