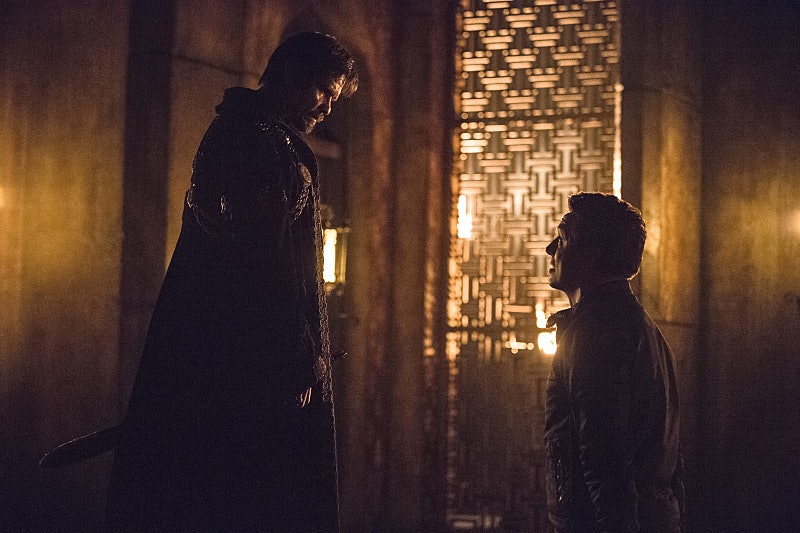 One of the great things about watching a show like Arrow is that you're constantly being introduced to not only new characters (whether they be friends or foes), but also a wide array of destinations. From the island of Lian Yu and Hong Kong to Starling City and even Central City at times, there's no telling where Team Arrow is going to end up next. And this week is certainly no exception. Wednesday night's Arrow episode "Nanda Parbat" will find Malcolm Merlyn in the clutches of Ra's al Ghul, which sounds pretty scary in and of itself. But what exactly is "Nanda Parbat" other than just a really tricky thing to spell? Believe it or not, you've actually been there before.

That's right, folks: Nanda Parbat is less of a thing and more of a very important location — one that won't be found on any tourist guide. You see, it's the actual home of the League of Assassins, located high up in the chilly mountains of Tibet. According to the DC Comics, it is said to be a place of both "healing and enlightenment watched over by the goddess-like figure Rama Kushna and her monks." It's also important to note that — in the comics at least — time moves very differently there, which explains why those who reside in the hidden city are usually able to retain their youthful appearance longer than that of normal person. However, upon leaving they discover that not as much time has passed in the outside world. Pretty cool, right?

But don't let these magical features fool you — this can also be a very dangerous place. In fact, those without a proper invite more than likely will never find their way out… well, alive anyway. So yeah, like I said, it's not really the best place to go vacationing, but that's exactly where Merlyn is headed — through no choice of his own, of course. And while it remains unclear whether or not this will serve as Merlyn's final resting place, this particular locale has already served many different purposes throughout the years for our beloved characters: some good, some bad, and some just downright terrifying.

It's Where Sara Lance Lived

After her days on the island were done, Sara went away to train and become a member of the League at — you guessed it — Nanda Parbat. It's also where she met Ra's al Ghul's daughter Nyssa, which gradually turned into a romantic relationship. (Sorry, Ollie.)

It's Where Merlyn Trained

He may be arriving against his will this time around, but initially, Merlyn was the one who sought this place out shortly after his wife passed away. He trained under the teachings of Ra's al Ghul for two years, which led to the creation of his alter ego, The Dark Archer. (Also, do you get to choose your vigilante name or is one just given to you? Asking for a friend.)

It's Where Oliver "Died"

OK, so he didn't end up actually dying as we all very well know by now. But the image of Ra's al Ghul stabbing Oliver's beautifully shirtless physique is something that I'm sure will haunt my dreams for many, many years to come. Seriously, this was one of the most shocking cliffhangers in Arrow history and it all took place atop of that mountain. Let's just hope history doesn't end up repeating itself, shall we?