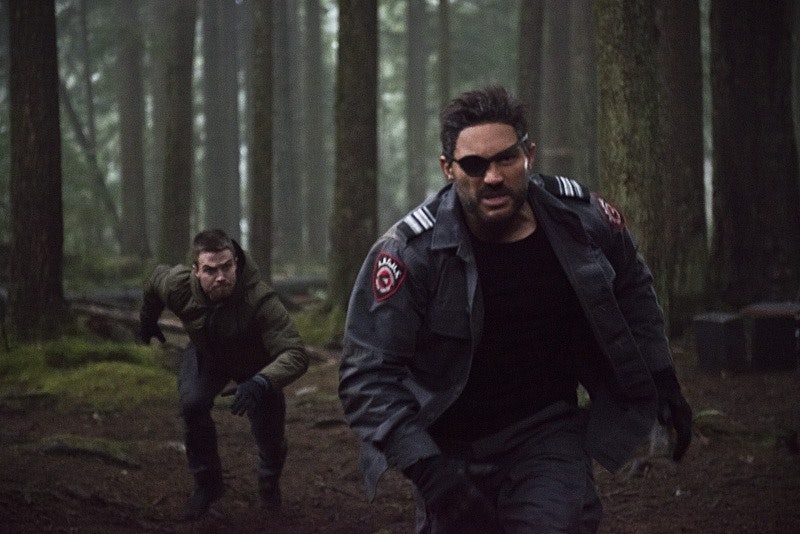 Not to sound too critical or anything, but perhaps Oliver might want to start thinking about investing a little more security in his make-shift island prison? Because having just one guard watch over one of the most dangerous killers in the world doesn't seem like the smartest decision in the world. But hey, that's just one girl's opinion. The reason I bring it up, though, is because Wednesday night's Arrow episode, aptly titled "The Return," saw Oliver return to the island of Lian Yu for some training exercises with Thea. (You know, because no one does family bonding quite like the Queens.) However, when Deathstroke eventually escapes from his cell (as we knew he would), it gets revealed that Slade is not the only inmate on the island.

After what I feel was a very quick capture, Oliver and Thea find themselves behind bars with no possible means of escaping (at least at that point). While weighing their options, Thea asked Oliver if there were any other inmates they could call out to for potential help. And it turns out, there was! However, Oliver insisted that the one other prisoner down there would not be very helpful, though he gave no indication who it could possibly be. But that doesn't mean we necessarily don't know the perp.

Part of me immediately wanted to say that it's China White, given that the flashbacks just so happened to correlate with her capture and would serve as a nice parallel. But then, as many of you already recalled, there's the matter of Digger Harkness (aka Captain Boomerang). Back during The Flash crossover, Oliver sent him away to the island once he was captured. So logically, he must be the unhelpful villain Oliver was referring to, right? (But, then again, when has this show ever been logical?)

I'm not saying that the prisoner isn't Captain Boomerang because it probably is. However, if this series has taught me anything it's to always expect the unexpected. And since we never actually saw his face, that makes me somewhat suspicious. Sure, I suppose that could just be because actor Nick Tarabay was unavailable at the time, but that doesn't completely rule out the chance that someone else is down there, does it? (Plus, where the fun in that?) I mean, Oliver has racked up plenty of enemies throughout the years, all of whom are way too dangerous to be kept in the public eye. And why didn't Slade release him upon his own escape? That would've significantly helped increase his odds of winning.

Call me crazy (everyone else does), but there could be more to all of this than meets the eye. Perhaps this could even be the initial setup for a brand new villain reveal down the line. Like I said, the security on this island is significantly lacking, so I'd find it easily believable if someone managed to escape. I also want to add that this new piece of intel comes just after learning that the villainous metahuman known as Deathbolt (who has the power to manipulate lightning) will make his way to Starling City in Episode 19. Just sayin'.

And even if it is definitely Boomerang behind those bars, having multiple villains in the same vicinity together still poses a very dangerous threat. When the time comes — and believe me it will — for them to bust out of those cells, they're going to have a severe ax (or should I say arrow?) to grind with our beloved vigilante. Watch your back, Ollie.