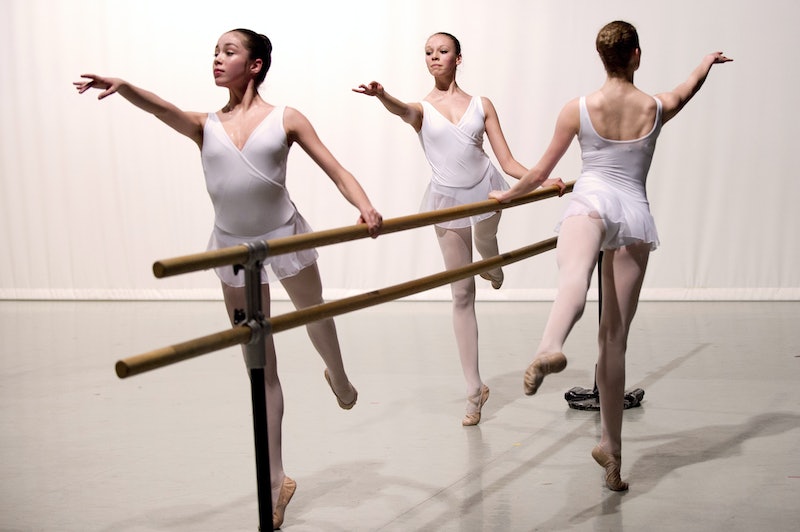 Raise your hand in the air like you just don't care if you ever wanted to be a ballerina when you were a little girl or boy. I was one of those girls, although I quickly learned that being a ballerina meant you spend a significant amount of time on your toes and I would rather be eating, or doing basically anything else. I'm sure that like me, a lot of you discovered that the ballerina gig is a bit of a pipe dream because while you adore the leotard and tutu, the dancing and discipline is not easy. This happened to me with tennis and gymnastics too, but those are stories for another time.

So, apart from my subpar work ethic and lack of coordination, along with the fact that I should probably never dance in public (I still do), I can't quit my love for the ballerina look. What is it about a leo (short for leotard) and skirt that makes my heart flutter like I'm watching any Zac Efron movie. So I'm going to do what I do best. Pretend. Akin to when I wear cute workout clothes and tell people I'm going to the gym, I will rock a leo and if anyone asks I'm taking a ballet class with Taylor Swift. First, I need some inspo. So here are some dope women that allegedly do ballet and rock the look like it should be rocked.

Jaime King, who is pregnant with her second child couldn't look more polished after a ballet class. She completes her look with a simple cropped, white cardigan. Dare we say she looks royal? (Get it?)

Find me someone who looks cooler than Ms. Chung does here with her slippers draped around her neck. Alexa, who is known for her sense of style, stuns in a casual black leo paired with denim cutoffs as she leaves a ballet class.

T-Swizzle doesn't just do ballet in her music videos. The mega star exits a class in L.A. looking astonishingly not sweaty, wearing a pretty pale pink skirt over a short-sleeved black leotard.

The adorable actress, looks rosey-cheeked and glowing after a class. Here she paired a light pink leotard with a white skirt. And we can't help but notice how 90s she looks with her jacket tied around her waist.

The model does ballet in her living room wearing sheer black tights and a burgundy cropped sweater over top her leotard.