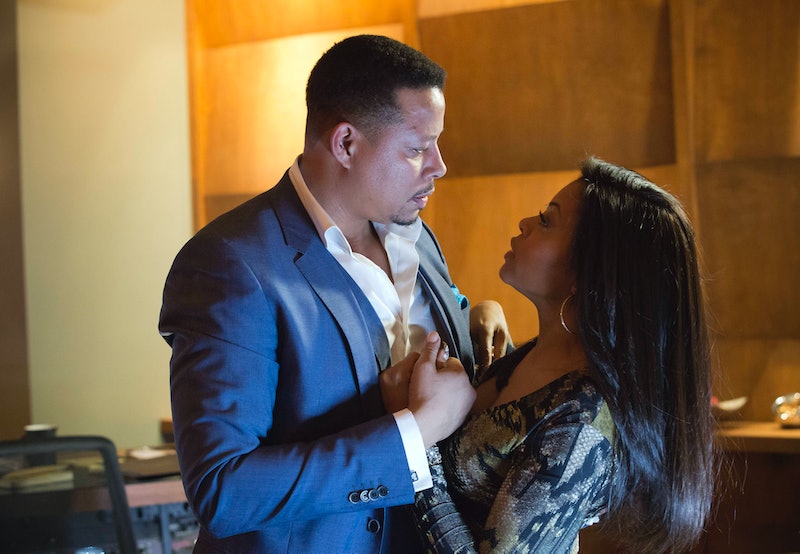 There was never any doubt that Empire 's Cookie and Lucious have insane chemistry together, but that didn't make last week's steamy hook-up any less surprising (not to mention extremely welcome). That said, this little act is bound to come with some pretty severe consequences, especially since Anika had a front row seat to the whole thing. (Can you say awkward?) But was this just a one night act of passion between two close friends or is there now a chance that Cookie and Luscious will actually get back together? Right now it's a little too soon to say, since we have no idea how they're both going to want to handle things moving forward. (Knowing Cookie, though, there are bound to be a few epic one-liners involved.)

We know they both have deep rooted feelings for one another that no amount of prison time can take away. But does that necessarily mean that they should get back together? Let's not forget that Lucious is now engaged to another woman — one who he truly does seem to love and care about. But then again, can anyone else ever really compare to someone as amazing as Cookie? (That was a rhetorical question because the answer is clearly no.) So given that this decision has the potential to alter the entire trajectory of the show, I think there's only one surefire way to settle this: by making a pro/con list.

PRO: Their Reunion Would Be Great For Business

Let's be honest, here — Cookie is much better at her job than Anika. She knows great talent when she sees it and isn't afraid to get her clients in gear by any means necessary. (Looking at you, Courtney Love!) Plus, she was immediately able to charm those investors after going off the teleprompter from Lucious' original speech. She gets the industry as well as Lucious' vision for their family's legacy. Together they could make Empire be everything they ever wanted and much, much more.

If Lucious did decide that he wanted to be with Cookie and not Anika, then he'd have a very serious problem on his hands. Remember how a few episodes back Lucious had a chat with Anika's father in the hopes that he'd cover up his ALS diagnosis during a standard medical exam, so Empire could continue with its IPO proceedings? Well, something tells me daddy dearest wouldn't be too keen on helping his ex-future-son-in-law since it would no longer mean a big payday for his little girl. That could put the company's entire future in jeopardy.

PRO: It Would Be Insanely Hot

Like I said before, these two have a ton of sexual chemistry together, so having them be a couple again would make for some super steamy scenes. Plus, it'd give fans an even bigger look at how these two work in an actual relationship — something the flashbacks have tip-toed around, but never really fully explored. I'm just dying to know what other kinds of lingerie Cookie has stored in that fur coat of hers.

CON: It's Way Too Soon

Empire is a fantastic show and has a lot of great things going for it — one of which is the amazing dynamic between Cookie and Lucious. So part of me feels that if they reconcile right now, it'll be way too soon. I, myself, have always been a fan of the slow burn, so to see these two gradually fall back in love with each other might be far more rewarding than if they're shoved back together right away.

Sorry, guys. Anika is OK and everything, but if giving up less screen time with her means trading in more screen time with Cookie, the choice is a no-brainer. I will always want more Cookie (and cookies).

Look, there's no doubt in my mind that a Lucious and Cookie reconciliation should be the long-term goal here. But I'd be lying if I didn't say I'm extremely into seeing Cookie have a little fling with Lucious' new security guy, Malcolm. Clearly, they're both interested in each other and seeing Lucious get jealous could serve as a very entertaining storyline. But in order for that to happen, their relationship needs to remain on rocky ground… at least for now.

As you see, I'm a little back and forth about the whole thing, but either way, it's safe to say that this couple's love story is far from over.