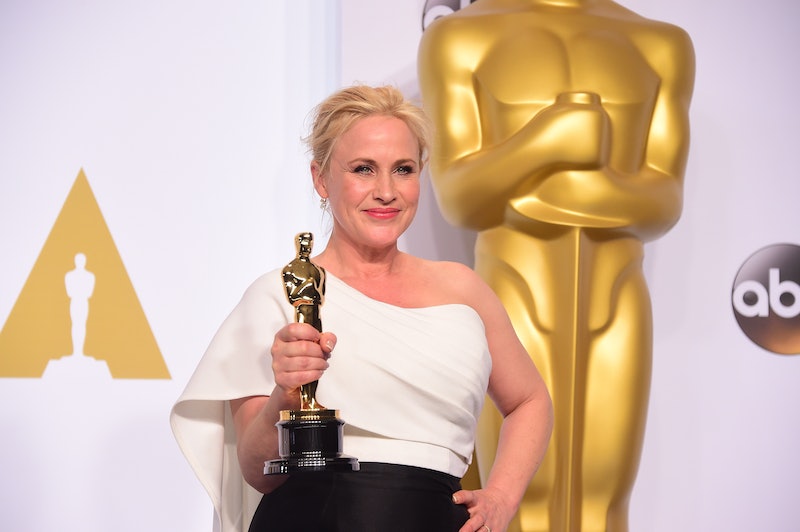 Patricia Arquette made a riveting speech at the Oscars on Sunday night sounding the call for wage equality that made Meryl Streep agree with gusto, but she quickly undid herself when she made comments backstage at the Awards, saying: "It’s time for all the women in America, and all the men who love women, and all the gay people, and all the people of color that we’ve fought for, to fight for us now." Her "us vs. them" brand of feminism was clarified as serving only cis, white women, and she faced immediate backlash for denying intersectional feminism. On Monday, the Best Supporting Actress winner took to Twitter defend her comments, but her series of tweets only adds flame to the fire as they egregiously miss the point.

She first tweeted: "Wage equality will help ALL women of all races in America. It will also help their children and society." But the source of the backlash and anger to her backstage comments is not, as she seems to think, coming from a place of misunderstanding. I'm sure you do not need to tell the LGBT community or people and women of color that wage equality would be a universal benefit now and in the future. But even this sweeping statement operates under the assumption that wage equality would be totally equal for all minorities—cis, white women still have career advantages over people of color and members of the LGBT community.

In my mind, no one needs to be told that women have been paying a "gender tax;" misogyny and sexism aren't news. And her comment that she's long been an advocate to the LGBT community are just a variation on an old theme (I'm not racist, I have black friends). But the bigger implication is that she still fails to see her offense in implying progress can only happen for one group at a time; calling gay people and people of color to fight for the progress of white women is not only a privileged message, but implies that gay people and people of color haven't been long fighting for wage equality, themselves.

Arquette went on to say:

For a white woman to tell a marginalized group how they should feel is white-splaining at its finest. As Roxane Gay tweeted, "I like when people teach me abou my communities." I just cannot see how Arquette is so strong in her conviction when she's been called out in droves already for ignoring the nuances of intersectionality.

No one is suggesting they are against equal pay. That would be a fool's errand. But Arquette is taking the criticism so personally she seems to believe the criticism of her backstage comments is a personal attack on her cause. It most certainly isn't: it's justified anger that a privileged white woman is saying that white women have fought for the causes of people of color and gay people for so long, that now it's their turn for equality. I will let the absurdity of that statement speak for itself.