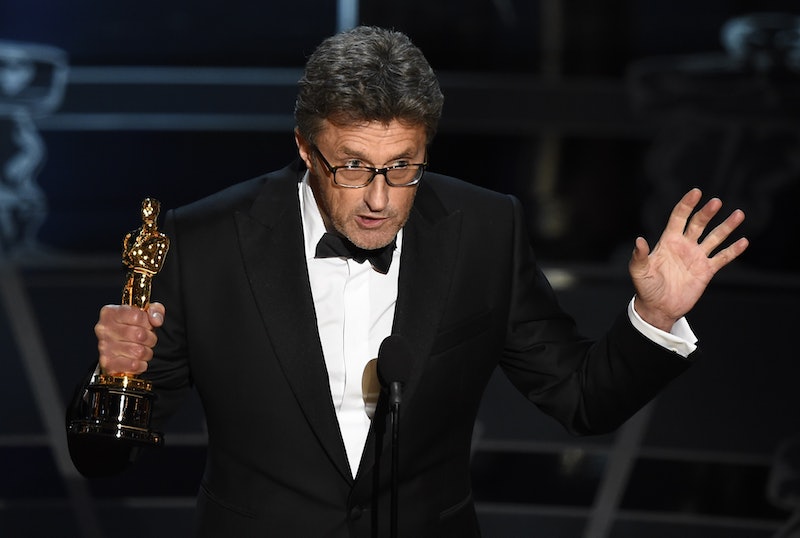 If you've ever found yourself listening to someone drone on and on about something and wished you could cut them off with a musical cue just like they do during the Oscars, excellent news: Now you can Just in time to send awards season out with a bang, Canadian creative agency Rethink has released a web app called “You're Cut Off” that does just that. And you guys? It is one of the greatest things I have ever seen. Not only that, but it's so unbelievably simple that I can't understand how no one has hitherto thought to make it. Seriously. Best (and probably most obnoxious) invention ever.

I'll admit that I find the musical speech cut-off the most perplexing part of awards season. I mean, I understand that keeping the speeches short is necessary for the shows to stay on schedule (or at least not run too far overtime); what I don't get, though, is why some people get cut off after about five seconds, while others are allotted what feels like hours before the music finally kicks in. I mean, if we're going to force people to remain within a certain time limit, let's at least make it consistent, right? It's only fair.

But alas, Anne Hathaway is right: The world is not fair. So hey, if we don't have a choice, then let's get drunk on the god-like power You're Cut Off gives us. All you have to do is load the page on your computer or your phone and make sure your volume is turned aaaaaaaaaaall the way up. When you feel that whomever you're speaking to has begun to outstay their welcome, push the big, friendly “TIME'S UP” button in the middle of the screen. The most glorious musical sendoff will begin to play, filling the world with sound and effectively drowning out whatever you don't want to hear. They will probably have no idea what's going on, but that's OK. Just go with it.

As Fast Company's Joe Berkowitz notes, you'll likely only be able to deploy this wonderful invention once per person, and only once; as such, you'd better make it count. I recommend unleashing its almighty power during the following situations:

1. When your friend who has a habit of repeating his or herself begins telling a long-winded story s/he's already told a million times before.

We all know how this one goes. Hurry it up and get to the punchline — it'll be better for everyone in the end.

2. When your nosiest relative starts asking you when you're going to settle down and get married already.

Don't even bother telling them it's none of their business. Just hit the “TIME'S UP” button as soon as they open their mouth, let the music play, and turn your back and sail away as soon as it's done.

3. When your horrible boss decides to chew you out for something that isn't your fault.

Actually, on second thought, cutting off your boss is a bad idea. Don't do it. But you can dream about it — s/he'll never know that you're secretly imagining a gigantic orchestra descending upon them and drowning them in music.

4. When your cat starts whining at you to feed her when it's way earlier than her dinner time.

I will be doing this constantly between the hours of 4:30 and 5:30 today. I guarantee it.

5. When your friend who is incapable of hanging up the phone after you say goodbye somehow manages to keep on you the line for an additional 20 minutes.

You know that person: You say, “Actually, I've got to run — talk to you later!”… only to have them reply, “Sure, bye! OH WAIT, that totally reminds me of this thing that I absolutely do not have to be telling you about right now, but I'm going to anyway, which will totally make you late for that thing you are supposed to be going to, but whatever, I'm just going to keep rambling on and on about it anyway.” The next time that happens, stealthily put your phone on speaker; then go to You're Cut Off and hit the button. The orchestra will swell… and when it's over, use the stunned silence as an opportunity to hang up. Mission accomplished.

6. When the opposing team at trivia night is quicker to answer the question than you are.

Don't actually do this. That would be cheating. But boy, would it be funny or what?

7. Whenever there's an awkward silence.

Who says epic music can only be used to silence other people? The best part about it is that it can also be used to fill silence. How lovely!

8. When you realize your own talkativeness is getting the better of you.

Are you the one who's always waffling on and on and on? Try using You're Cut Off to cut yourself off — or ask some friends to use it every time you start to get long-winded. Odds are you'll start to think a little more carefully about what you're about to say. After all, often a few well-chosen words can communicate more than even the most florid of paragraphs.

More like this
How To Use Festify, A Spotify Plug-In
By Emma Carey
How To Add Music To An Instagram Post
By Emma Carey
Tom Cruise Gives His Honest Review Of Lady Gaga’s New Song For 'Top Gun: Maverick'
By Hugh McIntyre
Why Can’t I Go Live On Instagram?
By Emma Carey
Get Even More From Bustle — Sign Up For The Newsletter