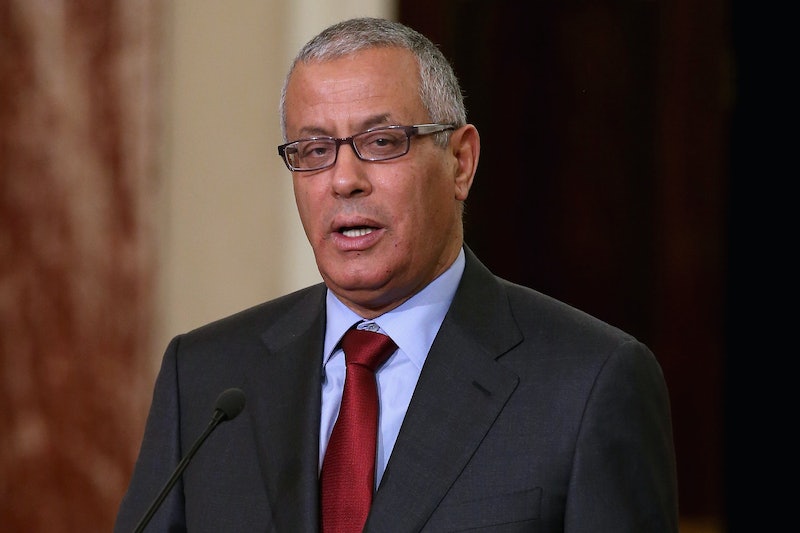 Libyan prime minister Ali Zeidan was kidnapped for "corruption and security issues" Thursday morning, when about 150 gunmen drove up to his hotel in Tripoli and stormed up to his floor to take him away. The raid happened at 4 a.m. He was later freed and on his way to work, a government spokesman reported.

The kidnapping was reportedly in retaliation for an American raid last weekend, which captured Libya-based terrorist Nazih Abdul-Hamed al-Ruqai, also known as Abu Anas al-Liby. Some of al-Liby's allies have repeatedly claimed that the Libyan government had advance knowledge of the raid, and had sanctioned the taking of a Libyan citizen.

"The revolutionaries have collected a lot of documents against Mr. Zeidan about corruption and security issues," said Jamma Zubian of the Tripoli-based High Committee of Revolutionaries. "He knew about the American raid against Abu Anas al-Liby and he did nothing to prevent that."

Zubain cited an order by the president of the country's General National Congress "to arrest anyone who could put the national security in danger." Actual members of the congress, though, condemned the kidnapping, calling it "unacceptable."

Zeidan's government, meanwhile, denies that it knew about the U.S. government's raid ahead of time. He very publicly demanded an explanation for the raid earlier this week, before backtracking to keep relations with the U.S. on track. But the New York Times reports that U.S. officials said Zeidan had in fact known about the raid ahead of time — and more than that, Zeidan had given his blessing.

That wouldn't be altogether surprising, since the country he governs is increasingly sliding into lawlessness. Since the overthrow of longtime dictator Muammar Gaddafi in 2011, terrorist organizations have taken root in unsecured parts of Libya, and in 2012, an attack on the American embassy in Benghazi killed four people, including the American ambassador.

Now, a new spike in violence is expected after the raid on al-Liby. Terrorist organizations have called for retaliatory attacks on U.S. citizens in the country. A Facebook posting said that they were in "disbelief that is ruled by something other than the Shariah of Allah; thus, there is no security for disbelievers there." Americans in Libya, for their part, are taking the threats seriously.

"We're all concerned for the potential for reprisals or backlash against foreigners,” one of them told NBC. “People have taken precautions, modified their behavior and are waiting to see whether this is going to be a slow burn that ends in some violent event.”

It's unclear whether Libyan security forces will be able to prevent any further attacks on government figures or foreign civilians. They apparently helped extract Zeidan on Thursday, but have often otherwise been overpowered by other militias.