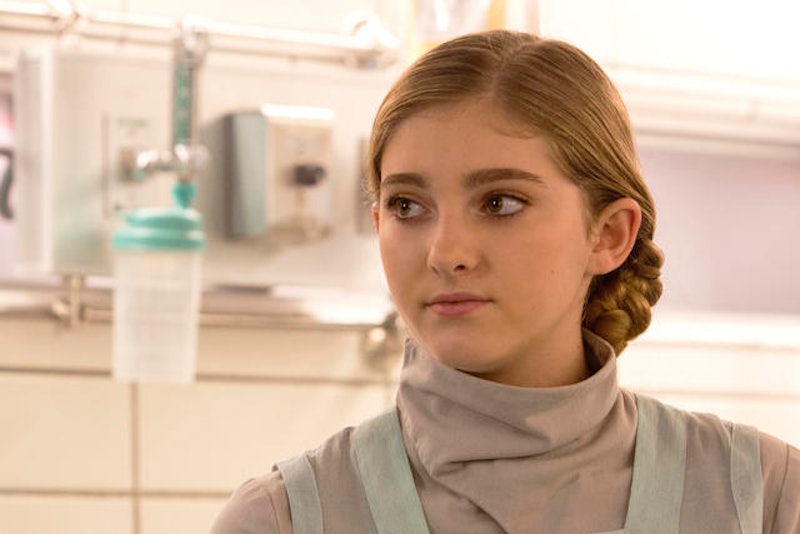 When we left Katniss' sister, Primrose Everdeen was slowly blossoming into a young, intelligent young lady. While her opportunities were limited back in District 12, with the rebels in District 13, Prim is now being trained to be a nurse. Even though Katniss was reluctant about the rebellion at first, through her sister, she is able to see what good could actually come from it. So what happens to Primrose Everdeen in Mockingjay, Part 2?

In the books, not much is told about her Prim's character as Katniss helps with the rebellion and eventually goes to fight in The Capitol, but since she has the healing gift like her mother, we imagine she is probably mending all the broken rebel bodies back in District 13 while looking after her beloved cat Buttercup. But here is what we do know. Warning: spoilers ahead!

After Katniss loses Gale to the peacekeepers in The Capitol, she see a group of Capitol children barricaded in front of President Snow's house, injured by hovercraft (similar to those in the Hunger Games) explosives they thought were medicine. When a group of medics go to help the children, Katniss notices a nurse with an untucked shirt at the back. She screams her sister's name just as a second hovercrafts sends another wave of bombs over the area, killing both Prim and the other medics.

Katniss is overcome with grief, especially when she realizes the hovercrafts were sent not by The Capitol, but by the rebels of District 13 (aka Gale Hawthorne), who were hoping to frame President Snow to gain more momentum for the rebellion. As a result, Katniss at President Snow's assassination, Katniss opts to kill President Alma Coin instead to avenge her sister's death.

After the war, Katniss and Peeta plant primrose bushes outside their home in District 12, and when Buttercup comes back looking for Prim, Katniss finally lets out her grief.