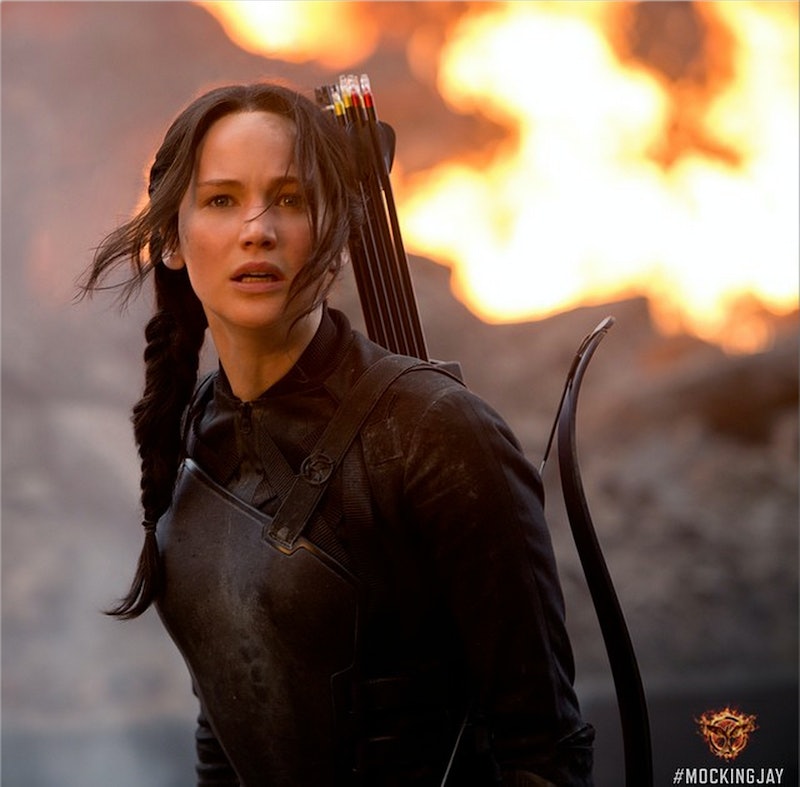 It's hard to believe there was a time when fans were starved for Hunger Games promotional material, because now Lionsgate releases new Mockingjay Part 1 promotional pictures practically every day. In the past week alone they've posted fresh photos of all the main characters to their Instagram page. Now we finally get to see what the members of Katniss' film crew and her fighting squad look like. In addition to those character shots, we also got some new photos of the heroes themselves like Katniss (Jennifer Lawrence) Finnick (Sam Claflin) and Peeta (Josh Hutcherson). (Yes, Peeta is a hero even if he's been hijacked.)

But what's cool about these pictures is that they're not just staged character shots, they're stills straight from the film itself. And by overanalyzing them, (which what I do best) I can guess which moments are depicted here to give us a hint at which scenes from the Mockingjay book will be included in the movie. Now we have these 16 photos and the speculation where the characters are at to tide us over until the film's premiere which is so close! So with just a few weeks left to wait, let's see what our District 13 residents are up to now. (Spoilers ahead.)

The leader of the rebellion is clearly in the middle of battle here and the look on her face suggests it's the first one she's been in because she can't believe it's really happening. It's probably the District 8 attack when the Capitol dropped bombs on the hospital for no other reason than that they could. This is a pretty iconic battle for Katniss as it's what really rallies her to fight for the cause and to coin that phrase: "If we burn, you burn with us."

Here Peeta is dressed in the presentable Capitol clothes they want him to wear to try to fool people into thinking that he's not being tortured. But take a look at that neckline of his and you'll notice the sharp point meets his neck and if he were to look down he could literally stab himself. I believe his stylists did that on purpose to force him to look up and appear calm and steady when the poor thing is having his mind hijacked. This scene probably comes from the interview he does with Caesar Flickerman where he tries to ask for a cease fire and all the rebels brand him a traitor. Yes, because clearly Peeta wants to be in this position in that horrible suit.

My favorite thing about this photo is that The Hunger Games Instagram page captioned him "an emotional victor of the Games." Like that's all Finnick is; just some emotional boy. I'd be emotional too if I had to compete in the arena twice and lost the love of my life. I have a feeling that the Finnick we see here is the confused mental patient version of himself that we see in much of the beginning of the Mockingjay book. But he has a slight hint of disbelief behind that confusion as though he's seeing something he wants to be real, but isn't sure it is. Hopefully it's him being reunited with Annie because those two are just the cutest.

As usual, he looks pissed. But that's because he's losing grip on his country and also he's dying. The way his eyes are positioned makes it seem like something else has caught his attention so perhaps this is when he's giving an address and Beetee breaks through the broadcast with anti-Capitol propaganda. Snow is less than pleased with this distraction.

Julianne Moore's slight smile shows that things are going her way as she oversees the District 13 command center. Perhaps this is when she sees Katniss has become a martyr for the troops just like she planned. Much like Snow has his own pawns, here she appears to be the master of her own game of chess. One she plans on winning, no matter the cost.

District 13 Effie is a far cry from her usual glamorous self, but I appreciate that she's still accessorizing. She looks annoyed here, and I have a feeling it's because her opinions aren't being taken seriously at whatever meeting she's sitting in on. Don't mess with a woman who is pursing her lips; everyone knows that's trouble.

The normally stoic, emotionless mentor has a trace of sadness here like he's witnessing Katniss' mental breakdown in the wake of learning that Peeta is being tortured. Or perhaps this is the scene where he has to recount the horrors the Capitol inflicted on him after he won the Games. (Mainly that his entire family was slaughtered.) But let's be real, this sadness could just as likely be him missing alcohol since District 13 made him sober up. In fact, I bet that's exactly what's causing his distress here.

Pen in hand, and ever the Gamemaker, Plutarch is clearly planning something here. Although who knows what that could be. Considering he fooled President Snow for years, he's got a pretty good poker face.

Cameraman Messalla looks resolute here to do his job and get the footage needed to help the rebel side. Perhaps this is in the wake of the hospital bombing where the footage he'll get will be disturbing but necessary for the cause.

With his armor on and gun at hand, it's clear Boggs is in some sort of battle situation here. I'd bet it's also the District 8 attack because he looks concerned, (as if Katniss just ran away to join the fight and is refusing to listen to her earpiece) but he also looks vaguely proud. He's basically like a military father figure for Katniss, protecting her in battle but also letting her defend herself. Love him.

Pollux is the avox soldier in the group and looks to have a lot of personality despite not being able to talk. Also I like him instantly because he has a version of Katniss' pin on his pocket. The setting by the lake makes me think this is when the crew travels to District 12 to get footage of Katniss in the woods. She sings that song, "The Hanging Tree" for Pollux. Her dulcet words affect him the most, causing him to cry, and the look on his face in this picture makes me think this is that moment: The bittersweet tones of mockingjays singing along to haunting song with their melodic voices.

Another cameraman, here we see Castor in action. The rocky ruins in the background make me think he's filming this in District 13 and the upset look on his face conveys that what he was recording was probably disturbing. A.K.A the scene where Finnick and Haymitch reveal the true horrors of the Capitol, like that they traded the victors as prostitutes lest they wanted a family member killed. Props to Castor for capturing such important dialogue on camera, even though it had to be hard to sit through.

As he's seated in the same type of chair Peeta was, I can gather that they're both in this scene together. I can practically hear Caesar dismissively saying. "Now, Peeta..." when Peeta attempts to justify Katniss' actions and make her look innocent. Also gotta love that suit. Oh, the Capitol and their fashion.

The technology wizard is clearly at home behind his control panel. His resolute look conveys that this is probably one of the times he's attempting breaking into the Capitol broadcast feed. And of course we know he'll succeed because he's Beetee.

Ah, Natalie Dormer. Her far off gaze just screams filmmaker as you can ptractically see her working out the shot, the lighting, and the angles in her head. But there's also a look of respect on her face that makes me believe she's interacting with Katniss. While Coin may write the Mockingjay off as someone not adept enough to rally the troops, Cressida always believed in her. She really helped Katniss open up and accept that she's a leader. Cressida gave up everything the Capitol had to offer to come work for the rebels and she's doing amazingly at her job. Also she's Natalie Dormer and how can you not love that?

The youngest Everdeen was forced to grow up quickly in the face of all this violence. She may only be 14 here, but she wears the looks of someone much older and wiser. But though her look is sad, it's also determined. She was really the backbone of her family in the book helping her mother care for patients and helping Katniss recover from the arena. You can read all of that on her face in this scene where she's likely giving some truthful advice, even if Katniss doesn't want to hear it.