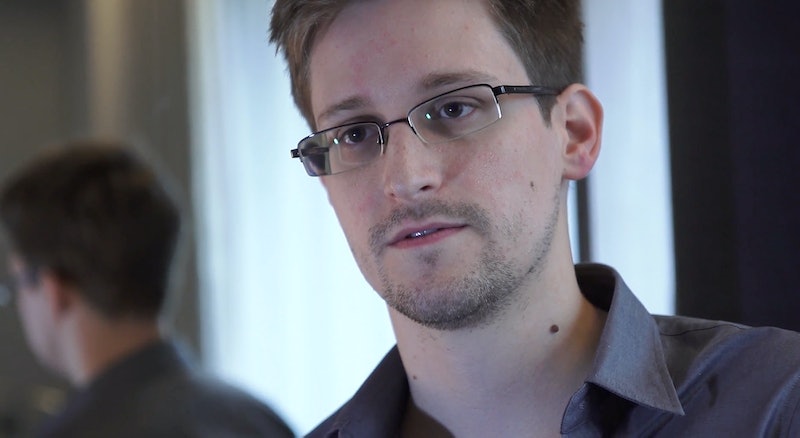 Edward Snowden's dad is in Moscow — and is rooting for his son to get the Nobel peace prize. The elder Snowden arrived in Moscow on Thursday for the first time since his son fled to Russia from Hong Kong. The younger Snowden received asylum there on Aug. 1, after more than a month spent in Moscow's Sheremetyevo Airport.

Lon Snowden told reporters in the airport that his son leaked information about the U.S. government's secret surveillance programs in the interest of transparency, and not for any awards, but deserved honors nonetheless. He had also been nominated for the Andrei Sakharov Prize, which goes to someone who has stood up against an oppressive power, which he did not win. (That award went to Malala Yousafzai, a teenage girl who stood up to the Taliban.)

But for all his cheerleading, Lon Snowden knows little about the whereabouts of his son, with whom he says he has no direct contact. "I cannot answer the question if Edward is in Moscow," he told reporters. “I don't know that. I haven't been informed where Edward is right now."

The former National Security Agency contractor has been highly secretive since arriving in Moscow, preferring to make statements through his lawyer, Anatoly Kucherena. On Wednesday, Kucherena said that Snowden "lives quite modestly in Russia" on donations and past savings, and will likely start looking for a job soon. "I am confident that he would find a high-paying job. He is very capable," he said. Kucherena also revealed that Snowden has a girlfriend.

"He is also learning Russian and soaking in Russian culture," Kucherena said. Sounds like it.

Snowden has also reportedly been approached by parties interested in making a movie about him, similar to The Fifth Estate about Julian Assange. (Assange, meanwhile, is not pleased with his film.)

Meanwhile, Glenn Greenwald, one of the journalists who first published Snowden's leaks in the Guardian, has been lobbying for a climate improvement for Snowden. He and his partner — who was detained by British authorities after traveling to Germany to meet another of the journalists reporting on Snowden’s leaks — live in sunny Rio de Janeiro, where temperatures average a pleasant 73 degrees Fahrenheit annually, compared to Moscow's 42.4. The duo testified before senators investigating the U.S. government's spying programs in Latin America on Wednesday.

Greenwald insisted that Snowden would be able to better provide information about spying programs from Brazil than from Moscow. Brazil is particularly invested in these revelations, because they revealed high-level spying on Brazil and its president.

“We now have several denunciations that show that the spy program is not about terrorism. It is about increasing the power of the American government," Greenwald said in Portuguese. "There are many nations saying, 'We're glad to be learning all this information' but almost nobody wants to protect the person responsible for letting the world discover it.”

Lon Snowden hasn’t weighed in on a move to Brazil yet, but he isn’t certain Edward will ever come home. "I'm not sure that my son will be returning to the U.S. again,” he said. “I hope to return to Russia many times.”