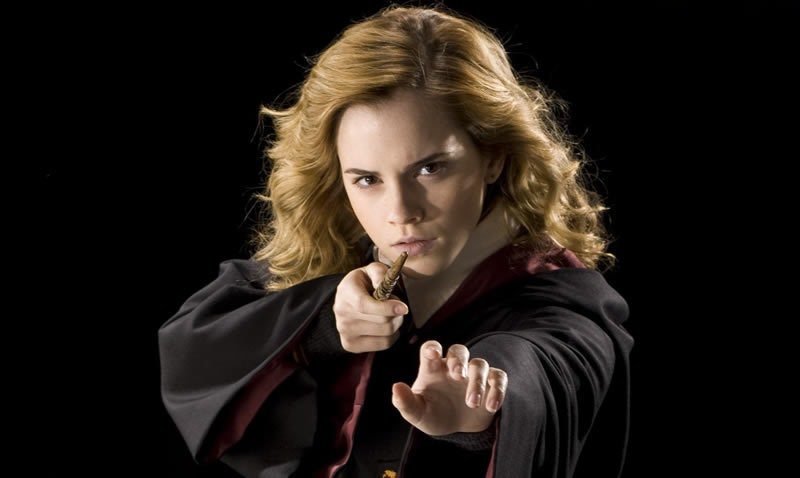 In case you somehow missed it, Emma Watson is a fairy tale princess. On and off screen. On the big screen, Watson will be playing Belle in Beauty and the Beast, because — who even needs a reason? It's the greatest news ever. Off the big screen, Watson denies that she is dating Prince Harry, but that hasn't stopped the world from being breathlessly obsessed with the idea of the couple anyway. I mean, let's be real. Watson would make an amazing princess. Look how much she's done for social justice already. Is there any doubt that she would be a monarch who cares about her people, even in a time when the British monarchs don't really do that much absolute ruling?

Regardless of whether you believe that Watson and Prince Harry are a thing, or should be a thing, the fact still remains that she is living out everyone's fairy tale life. As the woman most famous for playing Hermione Granger in the Harry Potter film series, this would all be a new foray into feminist fairy tales for her. However, we all know that she can more than handle it. Think of how much better fairy tales would be if Hermione Granger had been the feminist heroine in them.

Or don't even think about it. Check out these revised fairy tales below.

Hermione is a down-on-her-luck Muggleborn who was left in the care of her Pureblooded stepmother and her two purist stepsisters after the death of her Muggle mother and, later, father. Her stepmother forces her to do the same labor as the house elves, but Hermione uses that time to read all of the books in the library and become the greatest witch of her age. Thus, when the ball comes around, she uses their distraction to flee from their home and establish herself in a new city on her own. At random, while pushing for house elf rights at the Ministry of Magic, she runs into Prince Ronald, and the two fall in love as Ron tries to be half as good at being a good prince as she is at being a good citizen. Basically, Hermione is her own fairy godmother and her goal of social advancement was achieved in a completely different way.

Hermione is minding her own business, just trying to live, when the incredibly vain and evil Pansy Parkinson demands that her heart be cut out and brought to her to fuel a dark magic spell. Dobby the house elf is sent to do it, but he decides to let Hermione escape into the woods instead, where she runs into the seven Gryffindors — Harry Potter, Neville Longbottom, Dean Thomas, Seamus Finnigan, Lavender Brown, Parvati Patil, and Ginny Weasley. It doesn't take her long to galvanize them, with Harry's help, into a rebellion against Pansy that successfully unseats her from the throne and frees not only the Gryffindors but the entire kingdom of Hogwarts.

3. Beauty and the Beast

Hermione's father has a gambling problem that causes him to rack up immense debt that he tries to resolve by stealing from a nearby castle. He is caught by the Beast, and Hermione sacrifices her own freedom for that of her father's. There, she meets Harry Potter and the other servants in the castle, who reveal that the Beast used to be a kind prince named Ron, but years of jealousy and bitter resentment of his older and younger siblings made him throw a temper tantrum so big that someone transfigured him into a hideous Beast. Hermione, who fears no man or Beast, calls Ron out on his shortcomings and forces him to send her home — then began returning to the castle of her own free will to help the servants gain their own liberation. Over the course of that fight, she and Ron do fall in love and she breaks his curse.

An evil fairy gets really angry when no one invites her to the birth of Princess Hermione and decides to curse her so that, when she reaches a certain age, she will prick her finger on a spindle and die. Since her parents aren't idiots, they actually tell her about the curse, and Hermione spends the rest of her time between then and now researching a way to get herself and her kingdom out of this. She finds a spell that will simply put everyone around her to sleep and then customizes it — so, when the day comes that she pricks her finger, the bodies of everyone in the kingdom drops into a deep sleep and their spirits rise in a corporeal astral projection to defeat the evil fairy. Once she is gone, everyone awakens and rejoices.

Hermione is a mermaid who lives in Atlantica, but she has always been curious about the world above the ocean. When she gets the opportunity to go on a work-study program to the shore, she jumps at the chance — unaware the program is being run by an evil sea witch. Once she reaches the shore, she loses her voice, but, hey, she doesn't need her voice to listen. However, the world of land turns out to be not so different from the undersea world in terms of available knowledge, and Hermione decides to head back home. When she gets there, she discovers that the sea witch has stolen her voice to impersonate her, get into Atlantica, and harm her family. A furious Hermione #TakesBackAtlantica with the help of her two closest friends, Ron Weasley and Harry Potter.

When she gets locked in Gryffindor Tower, Hermione grows her hair as long as she can to satisfy the evil Bellatrix Black. Then she cuts it while Bellatrix is out, ties it to the window, and scales her way down the Tower herself. By the time Bellatrix returns, Hermione is long gone into the forest, charting her way across from the numerous times she stared out that Tower window until she had a basic map of the lay of the land memorized. Hermione asks the nearby kingdom ruled by House Weasley for help, explaining her situation to them, but, when they offer her an army, all she asks for is a wand. Bellatrix appears and Hermione duels her into submission, defeating her and remaining in the kingdom with the devilishly handsome Prince Ron.

While on her trip to deliver a basket of food to her grandmother, Hermione carries her wand with her to take on any talking wolves overly interested in where she's going. Remus Lupin is the only wolf she trusts, and he doesn't talk in that form. Thank you very much.