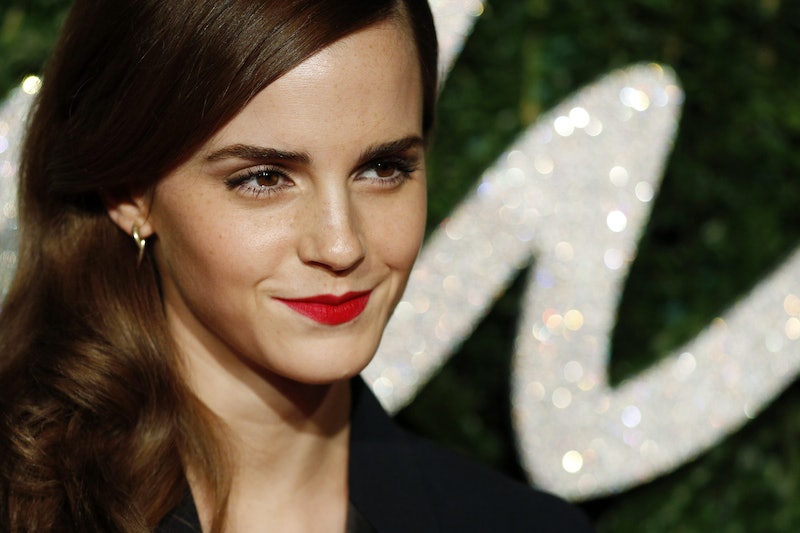 The Internet practically exploded on Friday with news that two members of England's elite may be dating. I'm talking about those Emma Watson and Prince Harry rumors. OK, so Watson isn't *technically* connected to royalty herself, but she's practically the queen of our generation. From her outspokenly awesome stance on feminism to her unforgettable role as Hermione Granger, she is worshipped by most of us—and for good reason. That's why news of her dating Prince Harry seemed like a dream come true. Key word: Seemed.

Instead of letting the madness continue (and by madness, I mean creating computer-generated images of this imaginary couple's kids and planning what their dates would be like), Watson took things into her own hands. On Sunday morning, Emma Watson shut down the Prince Harry romance rumors with a simple tweet.

In typical Emma Watson fashion, the message was flawless. It included a heart (showing she still loved everybody, despite the crazy rumors) and then ended with an "?!" to show just how ridiculous we all were for believing such a thing. Maybe "ridiculous" isn't even fair, we were just overly optimistic, hoping for them to be the new royal couple of our generation.

Well, although it's disappointing, it was a fun idea while it lasted. And at least she cleared up the rumors before we went and planned their wedding for them. (Although I wouldn't be surprised if someone had already begun working on that...)

If we look back, this isn't even the first time that the Internet shipped Emma Watson and a guy named Harry. I'm referencing those Harry Styles dating rumors from a few months ago. I guess since she's forever connected to the Harry Potter series, the world just thinks she belongs with someone named Harry.

In any case, here's how I imagine Hermione would react to the whole situation.

Initially, she'd be surprised when reading the Prince Harry rumors.

Then, she'd see how carried away the Internet got with the idea.

"Are those pictures of what our kids would look like?"

So she'd realize she needs to put a stop to the madness.

Finally, she just tells everybody to relax. Problem solved.

From now on, let's let Watson find her Prince Charming without the help of the Internet. Something tells me the girl is perfectly capable of doing that on her own.

More like this
Prince Harry Spoke Out About Archie & Lilibet’s Futures And What Worries Him The Most
By Sam Ramsden
'Heartstopper’s Joe Locke Wants To Be Disney’s First Gay Prince
By Sam Ramsden
Oops! The 'Stranger Things' Monopoly Game Has Spoilers For Season 4
By Alyssa Lapid
'Conversation With Friends' Star Alison Oliver Is Dating A 'Normal People' Alum
By Rachel Mantock
Get Even More From Bustle — Sign Up For The Newsletter