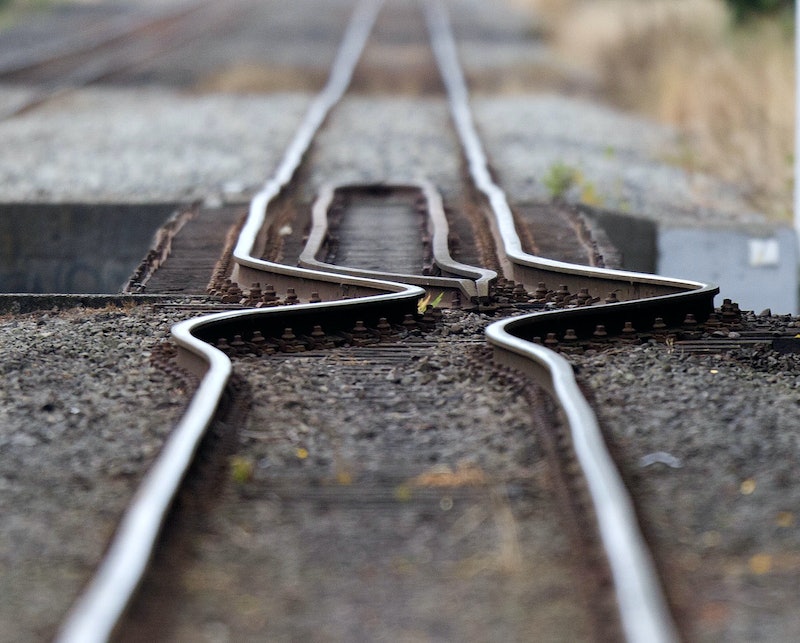 Railway commuters in Southern California suffered a big, harrowing blow Tuesday: A Metrolink train collided with a vehicle and derailed in Ventura County, leaving a reported 30 people injured, at least two of them critically. The grisly scene was reportedly spurred by a truck — bystanders told NBC News it looked like a produce truck dragging a trailer — that was struck by the train while crossing the tracks. It's a frightening story, and one that plays on our natural fears, but it's worth keeping things in perspective. Despite the Metrolink crash, railway travel has gotten safer over the past many years, so don't get too paranoid about punching your train ticket just yet.

As the AP details, this isn't the first high-profile wreck suffered by a Metrolink train, and as a matter of fact, it's nowhere near the worst. Back in 2008, one of their trains collided head-on with another from Union Pacific, causing a complete derailment and a thoroughly bloody scene. That crash (in Chatsworth, California) killed a staggering 25 people, and it was a horrible black eye for Metrolink — it was ultimately determined that their conductor ran a red light before colliding with the oncoming train.

Moreover, this latest Ventura County crash is just one in a flurry of recent railway incidents that might give you pause. In Palo Alto, California, a woman was killed when her SUV was struck by a train Monday night (though the cause of the wreck is not yet clear). In Canada, a high-profile train derailment is stirring fears about safe, clean fuel shipments. And of course, weeks after the tragic Metro North accident, an investigation is still ongoing.

Amid all this tension and grief, it's easy to snap to some dire, ultimately wrongheaded conclusions about the safety of rail travel. Some people likely felt a similar impulse last year amid the rash of high-profile plane crashes and disappearances, in spite of the fact that air travel remains one of the safest modes of transportation available.

It might set your mind at ease, however, to know that not only is railway travel a safe, clean form of travel in relative terms, it's also getting safer all the time. According to data from the Federal Railroad Administration (helpfully culled by NBC News), the number of annual train collisions has decreased sharply over the last 30+ years, from 9,461 in 1981, to just 2,068 in 2014. This has been tracked by a decline in total number of injuries and fatalities — back in 1981, 728 people died from train accidents, while in 2014, the number was 239.

In other words, of all the existential threats you may face out there in the world, having your train derail probably shouldn't rank too high on your list. That's not to dismiss or ignore what happened today, however, as authorities are still reportedly investigating the incident. But when you think of how many people die in America every day from car accidents — the National Highway Traffic Safety Administration recorded an average of just over 30,000 deaths per year from 2008 to 2012 — the relatively remote risks become that much more apparent.