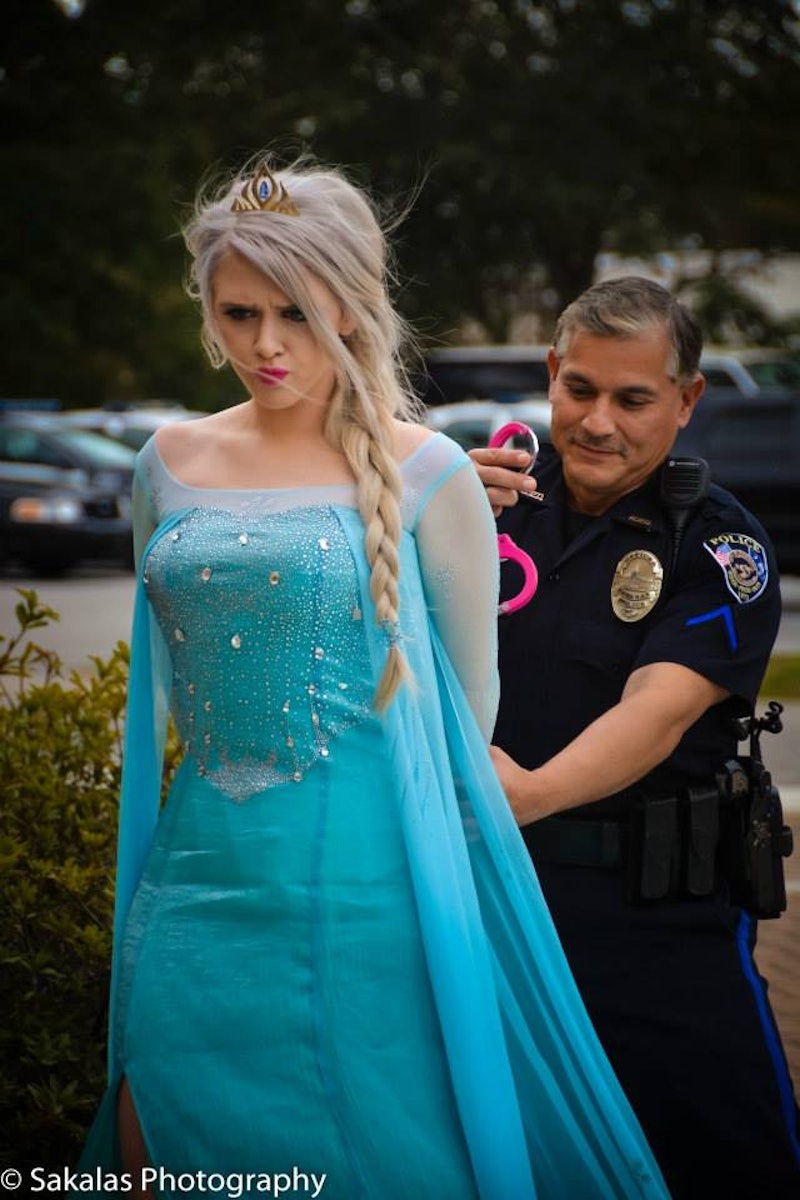 You've probably heard about Queen Elsa, one of the most heinous criminals of our time. After weeks of scheming against the warm winter temperatures and somehow managing to escape the arrest warrant put out for her in Kentucky, Elsa of Arendelle has finally been apprehended by South Carolina police. The crime? Allegedly trying to freeze a fountain at City Hall in the town of Hanahan. OK, so she wasn't really arrested — but I'm sure there are a few of you out there who fell for this prank!

What exactly went down at Hanahan City Hall? From what we can tell, it all started when Elsa tried to take the welcome warm temperatures many cities around the country have been experiencing and turn them back to levels below freezing. Kentucky police officers originally responded to the return of the cold last week by issuing a warrant for the ice queen's arrest; according to the announcement posted on their their Facebook page, the suspect was "a blonde female last seen wearing a long blue dress" who was also "known to burst into the song 'Let it Go!'" The warrant continued, "As you can see by the weather, she is very dangerous. Do not attempt to apprehend her alone." Kentucky did get over 12 inches of snow last week, with Harlan in particular registering temperatures as low as 11 degrees. Elsa was long gone by the time the worst was over, though, presumably having moved on to her next target.

And here's where these glorious photo come in: Yesterday, Glass Slipper Productions and photographer Tammy Sakalas, who found the arrest warrant put out by the Harlan PD quite amusing, decided to stage an arrest of Queen Elsa. The Hanahan Police Department in South Carolina, where both Glass Slipper Productions and Sakalas are based, agreed to participate in a mock-arrest of the ice queen. The creative masterminds then staged a photo shoot to document the event, in which the Queen was "caught" trying to freeze a fountain at the town's city hall.

She was then promptly arrested by officers and "charged" for attempting to bring cold temperatures to Hanahan.

Queen Elsa was then brought to the police station, where she was booked...

...and sentenced to community service with no jail time. She's free!

Do you think Queen Elsa might get into any more "trouble" elsewhere? Spring might look like it's on the way, but I'll be keeping an eye out for her!

More like this
Sarah Everard’s Killer Wayne Couzens Is Appealing His Whole-Life Sentence
By Sophie McEvoy
How To Fight For Reproductive Rights, Based On How Much Time You Have
By Courtney Young
The Music Industry Continues To Fail Black Women
By Precious Adesina
The Staircase Explores The Murder Trial That Ripped A Family Apart
By Gretchen Smail
Get Even More From Bustle — Sign Up For The Newsletter