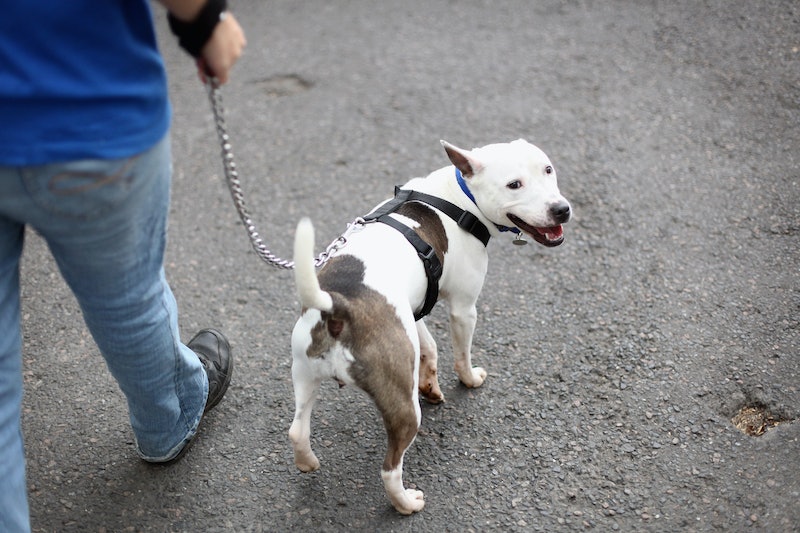 Good news for dogless dog-lovers out there: you may soon be able to get your “puppy fix” by taking shelter dogs for walks, all with the help of an easy-to-use mobile app. San Fransisco-based couple Charlie and Cristina Saunders are working to release Walkzee, an app that would pair potential-dog walkers with pups from shelters. The couple began the project after visiting Hawaii for their honeymoon. While there, they stopped by the Kauai Humane Society, which has a “Shelter Dogs on Field Trips” program that allows visitors to borrow a dog for the day, and took a dog named “Big Z” (pictured below) out hiking. They were so impressed by the program that they now want to bring it to a wider audience. Charlie Saunders told The Huffington Post:

While on the walk we talked about how amazing it was as a program. … So many dog lovers don't have a dog to spend time with, because of their job or home situation. Meanwhile, so many dogs wait for a walk in a shelter. We think this is crazy.

So their next step was to start Walkzee, a program designed to match dog walkers with shelter dogs, sort of like a canine version of Uber. The app would work by having shelters list information about available dogs; then users could search for dogs by location. The app would then tell them how to connect with the shelters (allowing shelters to maintain their own borrowing procedures and policies). The app would be free to use for both the walkers and the shelters.

The app sounds like a solid win-win for everyone involved: Dog lovers who can’t have their own dogs (due to housing restrictions or unruly schedules, for instance) get a chance to grab some dog time, the shelters get dog walking volunteers, and the dogs get some much-needed one-on-one attention, as well as exposure to potential adopters. It would also be a great app to use on vacations; how many times have you visited a gorgeous park or hiking spot and thought, “This would be so much better with a dog”?

The couple hope to launch Walkzee in June. The program has already reached its original Kickstarter goal of 20 thousand dollars, which will fund the Walkzee website. Further donations will be put toward developing the Walkzee mobile app. Check out Walkzee’s Kickstarter page, or visit them on Facebook. Find out more info in the video below.