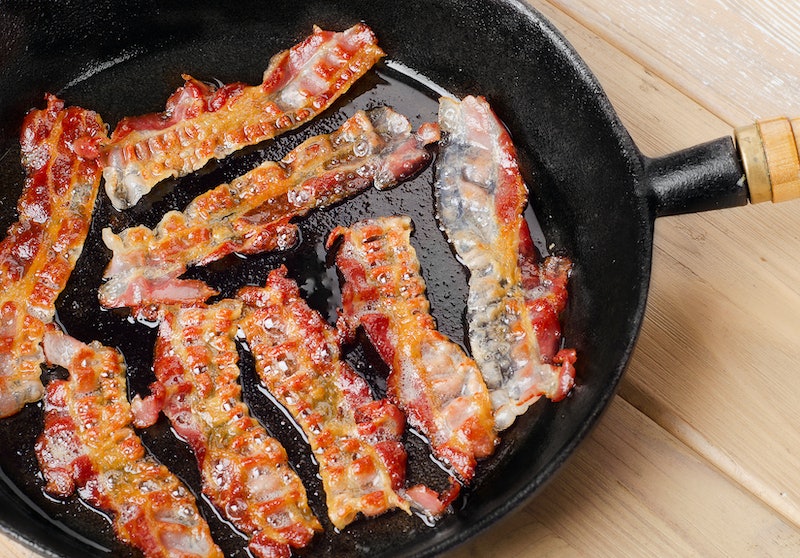 Holy wow, does Matt “Megatoad” Stonie love his bacon. Stonie, who is the number two guy in the Major League Eating association, just set the world record for bacon eating, shoving down 182 slices in five minutes. Yes, you read that right: This man ate around six pounds of bacon in less time than it takes the average person to put on liquid eyeliner. Wow, right?

The 19 year old from San Jose, CA didn’t have much competition to earn the title of “man who can eat the most bacon in the least amount of time.” The previous record was an unofficial 54 pieces of bacon, which pales in comparison to the massive amount of pig that Stonie crammed down his throat. The video from the event is rather hypnotic — I’ve never watched an eating competition before, so it fascinated me to see how Stonie grabbed handfuls of bacon and stuffed them into his mouth, periodically taking sips of water and wearing a pained expression the whole time. I’m a vegetarian and have never actually tried bacon before, but the entire ordeal would have been enough to make me give up the breakfast meat.

Stonie, who is used to longer competitions of 10 to 12 minutes in which he eats 10 to 15 pounds of food, told the Huffington Post the he was feeling fine after the competition. I, meanwhile, have a stomach ache just thinking about it. But even though Stonie has made the dream of holding the title of "person who loves bacon the most" unattainable for most of here are some bacon facts only the true aficionado knows. Knowledge is power, right?

1. The average American eats a lot of bacon.

Around 17.9 lbs of bacon a year to be exact, prepping us all to be the next “Megatoad.”

2. New Yorkers eat the most bacon.

The top bacon market in the United States is in New York.

3. National Bacon Day is a thing.

The unofficial holiday is celebrated in the US the Saturday before Labor Day.

From bacon toothpaste to bacon condoms to bacon-scented pillowcases, it’s safe to say that people love their bacon.