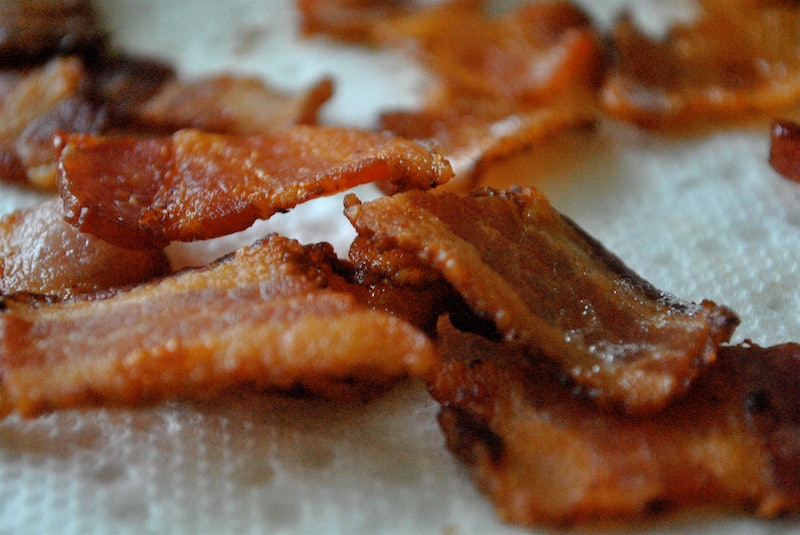 I know a lot of people are probably sick of the oversaturation of bacon-related products on the market — but this one is too bizarre not to comment on: Bacon-scented pillowcases exist. I’m not kidding. You can go to sleep on a pillow that smells like cured meat, allowing your love of bacon to permeate every aspect of your life — including your dreams. I guess bacon really does make everything better.

Consumerist unearthed this unusual item, previously believed by many to be mythical. Created by J&D’s Foods, who is perhaps best known for having won some money on America’s Funniest Home Videos and using the prize to launch the seasoning known as Bacon Salt, the pillowcase has been imbued with the scent of your favorite breakfast meat; according to its product page, it may or may not inspire better sleep habits or cause you to drool while snoozing. It should retain its scent for six to twleve months, even if you wash it — just be sure to use an unscented detergent and wash it separately. If you didn't manage to get a hold of one of Oscar Mayer's bacon-scented alarm clocks earlier in the year, this seems like a pretty substitution. For the curious, it looks like this:

Sweet, bacony dreams, indeed, and for the low, low price of $12.99. Alas, though, it appears to be out of stock at the moment; the product says that it’ll be available next week prior to holiday shipping deadlines, though, so if you would like to gift one of these magical cases to your favorite bacon-lover this season, you should be able to make it happen. You can also back-order them if you absolutely need to.

Want to know the weirdest thing about it, though? This isn’t the only bacon-scented piece of bedding to have hit the market. Walmart once stocked something called “Sleep Scentz,” a line of pillows, comforters, and other cushy bed accessories that came in varieties like chocolate, buttered popcorn, and lollipop (in addition to bacon, of course). They’re currently out of stock on Walmart’s website, so I’m not sure if they’re still available; someone posted a photo of the pizza-scented comforter on Reddit about eight months ago, though, so it seems to have been a pretty recent phenomenon.

You guys. I’ve just thought of the best idea ever. Take your bacon pillowcase…and combine it with Claire Manganiello’s Pizza Bed. Bacon Pizza Bed is definitely greater than the sum of its parts. Just sayin’.