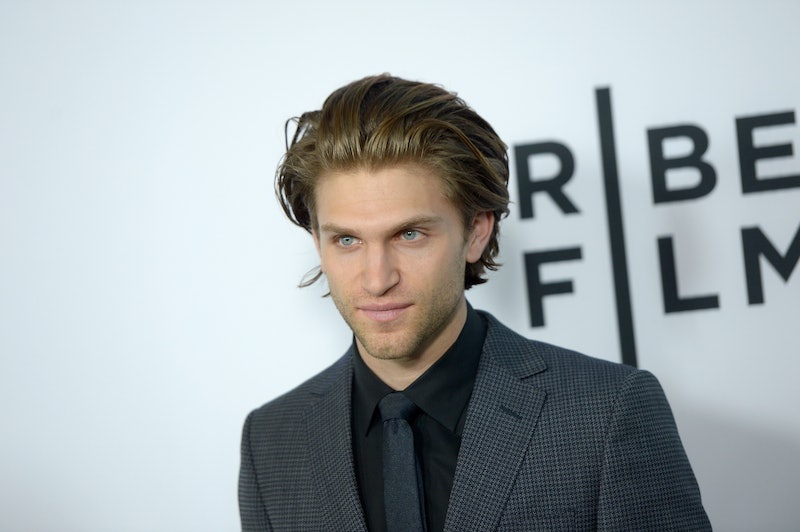 For five jaw-dropping seasons, Pretty Little Liars has had everyone screaming one big question at their TVs: Who is "A"?! We've gone through a laundry list of names (and subsequent fake-outs for some) including Alison, Mona, Cece, Ezra, and even Spencer and Toby, but the terrorizing texter is still at large. Recent episodes have hinted that Aria could be "A" — a huge theory among longtime fans, especially considering her brother Mike's involvement with Mona — but we won't get an answer this season. Creator Marlene King says "A" will be revealed in Season 6, but given that the show was renewed for two seasons, my best guess is that they'll save it for Season 6's big finale.

Most of the PLL cast already knows who "A" is — except for Lucy Hale, apparently — and it took star Keegan Allen (Toby) a long time to wrap his head around it. During a chat about the show and his new photography book life. love. beauty., Allen told me about his emotional roller coaster after finding out the show's biggest secret, what to expect after the reveal, and most importantly, whether "A" deserves to die. Plus, he threw out an endgame theory about Ali that will blow your mind, so you might want to sit down for this one.

The "A" Reveal Will Be Beautiful?

"Obviously the electric notion of this being endgame and understanding the entire show was shocking. It is such a huge thing in my life and it has always been a big deal with our fan base to find out the ultimate answer. It kind of felt a little bit overwhelming," Allen explains of the "A" reveal. "But after that wore off, it then turned into a brilliant understanding of puzzle pieces and everything fitting into place and understanding why was more interesting than understanding who. The story of why things are the way they are is heartbreakingly beautiful."

Does Allen Think "A" Will Deserve to Die?

After "A" is out in the open, does Allen think she or he should be thrown to the wolves, though? He's on the fence about whether this villain should die:

Once you guys finally find out why — like I said, it’s not interesting who 'A' is, but why 'A' did it — I don’t know if you guys will feel the same way once you find out why. I don't have an answer yet ... because there’s a whole bunch of stuff that people don’t understand yet that we haven’t allowed the audience in on yet. And that’s where all the fun is, and that’s why it’s taken five seasons and why it’s going for another two. There’s a lot of backstory which needs to be prepared to reveal and give an entire layer to why this has happened. But on another trajectory of the show, because now our audience is older, more mature, they understand things. We can go darker and deeper and explain more at this point.

The closest Allen gets to actually revealing the black-hoodie-wearing villain is saying that his photography could hold some clues. So has Allen snapped photos of the real A? He remains vague, saying, "short answer: yes; long answer: no."

Allen Knows How The Show Ends (In His Dreams)

Allen has crafted what he calls an "amazing, huge, explosive ending to the show" that is crazy in the best way. "At the end of the show, we have the four girls walk outside and it starts snowing. And they’re like, ‘It’s so weird that it’s snowing in the middle of summer."Then the camera pulls out and they’re in a little snow globe," Allen says excitedly. "And Alison is crazy at Radley and she’s lost her mind and it was all a figment of her imagination! That’s what I wish would happen; that’s my own crazy interpretation of it ultimately."

Allen's theory is original, but not completely his own idea; he gives credit where credit's due and says it's linked to a fan theory he read. Another one of his favorites is that PLL is "all one big huge play and the audience is 'A,' and at the end of the show, they turn to the camera and they break the fourth wall and realize it’s all like the Truman Show." And perhaps that play is being performed at Radley and Alison is watching from the audience, carrying a snow globe? OK, maybe I'm getting out of hand with this one.

The Audience Will Know About "A" Before The Liars Do

For now, we have to theorize at home while waiting to see what unfolds with "A" vs. the Liars in the next two seasons. Spoiler alert: it will include a lot of freaking out. "We're letting the audience in on the secret and then watching the characters kind of run around in this maze of craziness while the audience knows what’s going on and they’re screaming at the TV and trying to get the characters to know," Allen explains with a laugh. "And that's what television what should always be: exciting and fun."