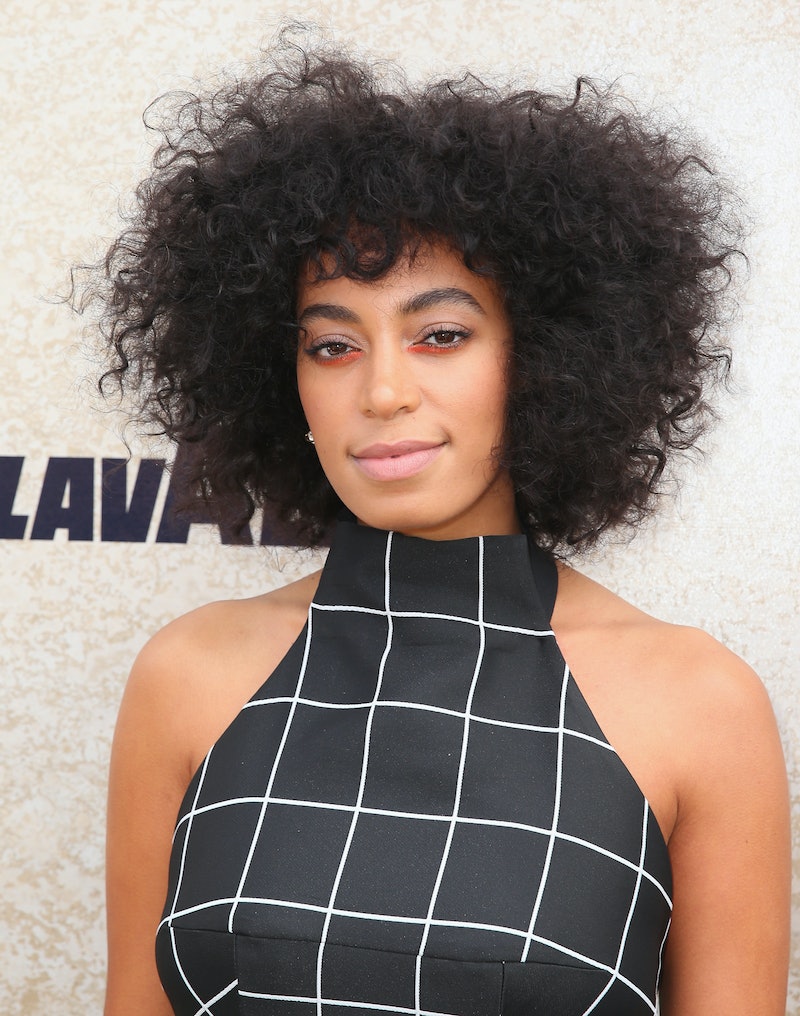 We are only 53 days into 2015 and public opinions on black women's hair have already been off to a rocky start. January brought us the QVC debacle, where host Sandra Bennett made comments about bad hair styles while the camera focused on a black model with natural hair. Though the truth of the matter is debatable (was it simply bad timing, was she talking about 80s hairstyles from her youth, or was she making racist jabs?), the reactions about this moment in television are more powerful than what was actually said.

While people point fingers at each other and call one another "too sensitive," it is important to acknowledge the history of black hair (a history that has ultimately dictated that black hair is ugly and unworthy of beauty since before the Jim Crow laws) in order to know why something like the QVC comments would be triggering and hurtful to many people. I mean, just a few months ago InTouch published a small sidebar column that compared Solange Knowles' gorgeous mane to a dog's. While people still defend the article, claiming that it was playful, pleading ignorance when stating something that is borderline racist no longer feels like a valid apology but rather a means of excusing micro-aggressive racist remarks.

Just as we were beginning to think that perhaps January's racist comments about hair were bad leftover juju from 2014, the problematic show Fashion Police decided to remind black women of their place in fashion by making underhanded comments about actress and musician Zendaya's hair style at the 2015 Oscars. Giuliana Rancic and Kelly Osbourne thought it was fair game to joke that Zendaya's hair smelled like patchouli oil and weed, without giving those remarks a second thought.

The fact that it is 2015 and comments such as these are still being made under the notion that the commenters didn't realize they could be hurtful is almost more hurtful than the comments themselves. Have we not been paying attention to our own history as Americans? Are non-blacks completely ignorant of the forced Euro-centric standards of beauty that inflict self hate within the communities of people of color? Even in Giuliana's apology, she never acknowledged that her comment was racist for fear of being labeled as such. But when it comes to a black woman's hair, you just cannot erase race from the picture.

As a black woman who loves her natural hair now, I can admit that I was once a victim of believing that my hair would be better if it was "tame" and fit the aforementioned Euro-centric standards of beauty. For two thirds of my life, I hated my hair, unable to truly realize how awesome it was because of what the media taught me. However, after years of unlearning this psychology about my hair, I finally made the long journey of self love and acceptance towards it. So perhaps the story of my hair journey will help begin a conversation and aid in the understanding of why these comments about the texture and style of black women's hair cut deep.

I'll admit that I wasn't the most popular (or even attractive) kid growing up. Though my curated Instagram and style blog may fool people into thinking I lived a charmed life, growing up was a different story. I grew to be five feet tall by the fourth grade, all along with glasses, knobby knees, and having the grace of a newborn giraffe. Despite being an easy target for all bullies in a tri-state radius, the last thing I needed was for the world to know that I have curly hair. Unruly, wild, crazy, even ugly — these are the words I allowed myself to believe described my hair. I would only let it out a handful of times in my youth.

(4-year-old me, looking like Rudy Huxtable.)One of the few times I unleashed my curls was during the seventh grade production of La Bohème. When I wore it in the popular half up style (think Ariana Grande), classmates and even teachers asked me when I was going to "style it" when I believed it was already well kept. Confused by this statement, I didn't allow myself to wear my hair curly until high school, where boys would let me know that I was prettier when I wore it straight. Feeling embarrassed (rather than telling the boys off and wearing it curly anyway) I rocked a tight bun for most of high school — a bun that I still blame for my current migraines.

From buns to straightened hair on the weekends, it wasn't until I was in college that anyone knew I had naturally curly tendrils. I never truly hated my hair; I was more nervous about everyone's opinion on it. It was the comments of my peers that made me feel hideous. Between being bombarded with John Frieda commercials from the age of 11 and unsolicited advice from my peers, I truly started to believe that my hair was unruly, wild, and needed to be tamed like a lion in a circus. After so many disapproving years, I became convinced that I was some sort of monster.

It wasn't until one day during my junior year of college that I simply could not stand to do my hair again. Keep in mind that washing, blow drying, and straightening my hair was at least a three hour job — on a good day.

Perhaps it was a mixture of maturity and priorities shifting that made me throw in the towel. But I still remember standing in the dorm room bathroom feeling exhausted at the idea of having to spend hours washing and straightening my hair, when that time could be better served watching Project Runway or Top Chef while working on class projects. So, I got into the shower, washed every straightened strand, and simply walked away from the bathroom. To be honest, I remember it in slow motion — like the hero walking away from an explosion in an action film.

My roommate asked me if I was going to be in the bathroom for a little while longer to straighten, and I told her no. At that point the shackles were off, and it was absolutely freeing. I remember the feeling of my scalp and hair not being weighed down by a cocktail of straightening serums. For the first time ever, I truly felt beautiful — makeup-free face, wet hair, and all. Maybe it was because the times were shifting and natural hair was "in," but when I stepped out the house with my new natural "do," most comments were positive.

Regardless of the trend, I know in my heart that it was the self confidence I had within myself that allowed people to perceive my hair as beautiful as well. I literally couldn't wait to show it off! I'm not saying that everyday with this hair is roses, but knowing that my hair is a representation of my ancestors, that it tells a story of mixed heritage from Native grandmothers to Creole aunties, I would never want to hide it again — regardless of the public words said against it. This doesn't make these comments hurt less, but I'm with Zendaya: I'm not going to waste my time worrying about what others think about our beautiful hair. Instead, I will school them, then drop the mic.