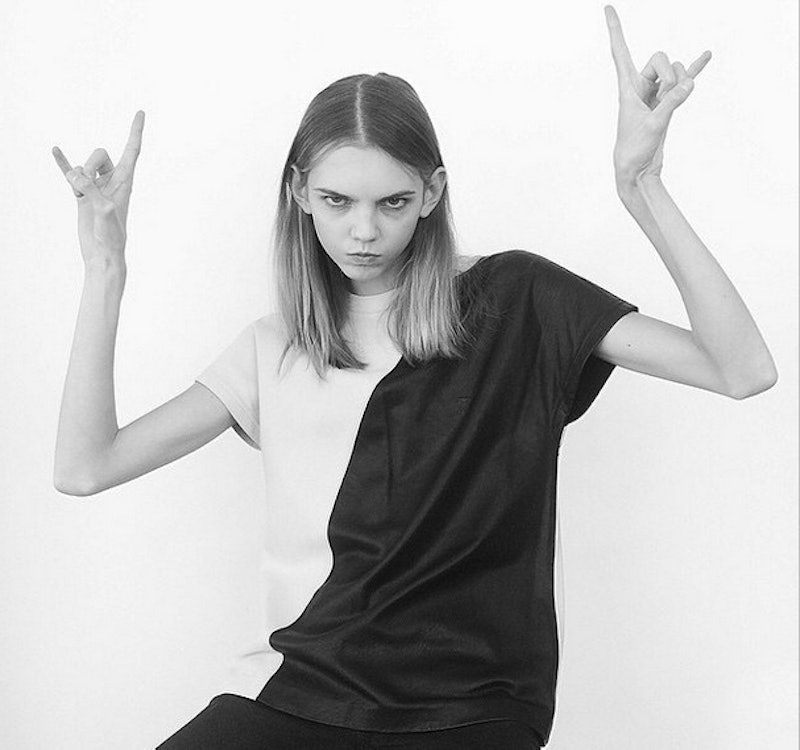 Molly Bair. If you don't know that name, write it down. Or don't because she is on the verge of being the most buzzed about model this side of NYFW royalty Kendall Jenner. So, soon enough, you won't be able to forget her. Standing at six feet tall with a slender frame and Cara Delevigne level eyebrow game, Bair began modeling less than a year ago after she was discovered, in a mere twist of fate, by a scout from The Society Management at a flea market. Fast forward six months and Bair has become a breakout star, closing the Chanel Haute Couture show, landing a spread in Italian Vogue, dominating NYFW and basically being labeled "the one to watch" by industry insiders. Not bad for a high school tennis player from suburban Philadelphia who was, until the fashion industry got ahold of her, concentrated on applying to college to pursue computer science or environmental lobbying. As it turns out, the real reason everyone is falling head over heels in L-O-V-E with Molly Bair is that exact combination of beauty and brains. Big, blue eyes and statuesque figure aside, the runway isn't the only place where she stands tall and her unique features and killer confidence are making waves, too.

While it may seen like Miss Molly Bair has it made, until she was plucked from the flea market masses last July she never associated herself in any way with the modeling industry. Sure, on paper, she is tall, yet tiny, but she also boasts unique features that earned her nicknames like, "praying mantis," "alien," and "rat." Yes, seriously, "rat," because people can be horrific and hurtful. Having been teased by her peers growing up for her larger than average, pointy ears and brows that met in the middle, Bair was just as shocked as anyone that those very features would make her famous, let alone land her on the cover of Vogue Italia.

During an interview with CNN, Bair expressed her awe of the situation by saying, "I would never think that a girl who spent most of her childhood with a unibrow, glasses and a Yoda shirt would be in Italian Vogue." Yet, she was and she rocked it.

Bair is, undoubtedly, becoming the new face of high fashion, challenging an industry with often rigid and unforgiving beauty standards and bringing down the proverbial bully along the way. But, just like anyone with raving fans, she has also met her fair share of critics. For every article with headlines like, "Gawky Can Be Gorgeous," or "Alienesque is the New Modelesque," that she inspires, there also exist comments that perpetuate the unkind name calling she experienced in her adolescence. It is of no matter to Bair though, who, like a true role model, is learning to take it in stride. Perhaps ripping a page out of Taylor Swift's book (can these two please become besties ASAP?) the top model shakes off the haters by being quick to announce her acceptance of the quirky features that have simultaneously garnered rude, unwarranted disapproval and rapid, unbridled success. Sticks and stones, as they say.

As luck would have it, nice girls don't always finish last. No, sometimes they blaze across the finish line lightyears ahead of the competition. As a result, this individual victory happens to mean that self confidence and self acceptance are also having their day in the sun as Molly Bair stands in a spotlight that seemingly has no off switch. Just think, had the middle school girl being teased for her untamed brow believed the hateful words of her bully, she may not have closed the show for Karl Lagerfeld during Paris Haute Couture week with a bevy of flower-toting male models following in her wake.

Had the 13-year-old tennis player being called "rat" let others have the final say in regards to how she felt about herself or allowed her peers to convince her that she wasn't beautiful, she probably wouldn't have walked down the runways of cult favorite Alexander Wang, iconic DKNY, new-cool Public School and ultimate cool Marc Jacobs during NYFW.

And had the girl on the verge of a massive modeling career let the cyber bullies of the world bring her down, she would have missed out on the chance to proudly put her uniqueness on blast with a feature in W Magazine, earning a spot in Coach's spring campaign and becoming the latest muse of LOVE Magazine, maker of trends and lover of dynamic modeling duos Jenner and Delevigne and the Hadid sisters.

For those of you keeping score, that's Molly Bair: 5182; bullies and generally awful people of the world: 0. Ultimately, Bair's power is special and the impact she will have on the modeling and fashion industry is yet to be seen. We can only hope she maintains her upward trajectory of positivity. This past week, she took her talents across the pond, walking in London Fashion Week shows for J.W. Anderson and Giles (with Kendall Jenner, a pairing that is already being affectionately dubbed #MollandDall) and opened Milan Fashion Week with a strut down the Gucci catwalk. World domination? If anyone were to take over, I would be glad to see Molly Bair at the helm.

In case you aren't already obsessed with The Society Management's most influential discovery of late, here are five more reasons to love Molly:

1. She Is The Poster Child For Self Acceptance

"I'm kind of, I guess, embracing that alien, rat, demon, goblin, gremlin sort of vibe, and going with it."

2. She Believes Being Unique Is Beautiful

"I think being a model and being in fashion has really opened up my eyes to beauty in general. I think that beauty really comes from uniqueness."

3. She Supports Weirdness In Photos And Is Totally Anti-Perfection

"If anything would become iconic, it would probably be a hideous face i'm making. That's sort of me. If you have people taking pictures of you don't just smile, do something weird. Why not? If you have the attention around you, people need to embrace their uniqueness. We need to stop thinking that we all need to have is perfect skin and perfect lashes. Being happy and confident is great.

4. She Is Generally Goofy, Has A Killer Sense Of Humor And Doesn't Take Herself Too Seriously

Hospital gowns are so the new black. And no, Molly, I absolutely do not have a better #tbt picture than that. Matching track suits are the kewlest.

5. She Is Just A Teenager

In addition to walking in all the best couture shows, Molly Bair was also spotted attending junior prom and winning a high school tennis league championship with her friends, because, you guys, she's still just a teenager! Whatever I was doing at 17, it was not standing up to my bullies and being a super awesome role model. You go, girl.

This year, NYFW brought us strong street style, creative new trends and fresh fashion, but I don't think it is a stretch to say that one of the most magical things to come down the runway was Molly Bair. Cheers to being unique, rocking the quirks that you've got and embracing everything the bullies think you shouldn't be.

More like this
Instagram & Facebook May Finally Lift Their Notorious Nudity Ban
By Allie Fasanella
Phoebe Dynevor Serves ‘Bridgerton’ Underboob In Stunning Floral Gown
By El Hunt
J.Lo's Micro-French Manicure Has A Fun, Sparkly Twist
By Olivia Rose Rushing
All Of Doja Cat’s Wildest Paris Couture Week Looks
By Dominique Norman
Get Even More From Bustle — Sign Up For The Newsletter
From hair trends to relationship advice, our daily newsletter has everything you need to sound like a person who’s on TikTok, even if you aren’t.