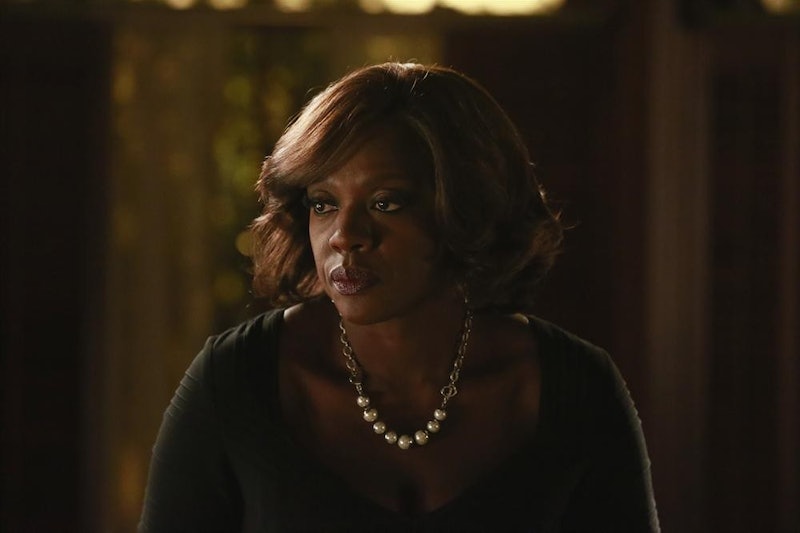 One of the many great things I love about a series like ABC's How To Get Away With Murder, is the fact that absolutely nothing is arbitrary. Every single details is put there for a reason and will prove to be important at some point down the line. And I'm not just talking about big things like the missing trophy scales or Michaela's engagement ring, but even something as seemingly insignificant as Annalise's vodka brand name because — guess what — that too could possibly have an underlying meaning. If you recall, last Thursday's episode "Mama's Here Now" saw both Annalise and Bonnie taking more than their fair share of swigs from the same vodka bottle, which made me curious to learn more about this particular kind of Keating-approved alcohol. (If I drink it, will I too be able to get away with murder?)

But, as it turns out, Annalise's drink of choice, Kashchey Vodka, doesn't actually appear to exist as a real-life beverage. So why take the time to create a fictional one? Perhaps the name is a small clue regarding the show's eventual endgame. Because, as it turns out, the word "Kashchey" refers to a Russian opera called "Kashchey the Immortal."

There have many different variations about this tale, however, the main gist of the story centers around an antagonist known as Kashchey the Immortal, an evil wizard who abducts Prince Ivan's true love. But after his magic mirror reveals that the prince could lead to his undoing, he sends his daughter, Kashcheyevn, to kill him. Too bad she falls in love with him in the process. (Damn those princes and their irresistible charms!) And since Kashchey's immortality hinges on his daughter's lack of emotion (his soul resides in her unshed tears), her newfound feelings end up killing him.

So what does this have to do with getting away with murder? Well, that depends on your interpretation. Is Sam the parallel of Kashchey — the evil villain who derives pleasure from scaring women and preventing them from being with their one true love? (In Annalise's case, I guess this is Nate.) You could definitely see it that way, especially since Sam, like Kashchey, is now dead. However, what if we were to look at this in a different way… and made Annalise herself the character counterpart to Kashchey?

Think about it — she has an uncanny ability to manipulate those around her; she craves being in complete control of not just herself, but those around her. And while she may not have actual magical powers like Kashchey, there's no denying that her abilities both as a lawyer and an accessory to murder are almost otherworldly. In short, Viola Davis is a goddess and when she tells you to jump, you're only option is to ask "how high"? These are just the facts of life, you guys.

But if I'm right and Annalise is supposed to be a loose interpretation of Kashchey (via her vodka bottle), then is this the show's roundabout way of hinting to us that the inevitable conclusion of this show will result in Annalise's death? Believe me, I hate the thought just as much as you do, but it definitely makes sense. I mean, think of all the crimes Annalise has committed throughout just this season alone. Her actions are bound to come with some pretty heavy consequences eventually. Death would be the logical conclusion.

Then there's the fact that Kashchey had a thing for staring into his magic mirror. Sound familiar?

Sure, she may not have a daughter that turns against her like Kashchey did, but she does have her students. And if they ever decide to go against her for any reason, there's no telling what catastrophic events could unfold. (But something tells me it's bound to involve some more murdering.)

It's like they always say: you are what you drink.