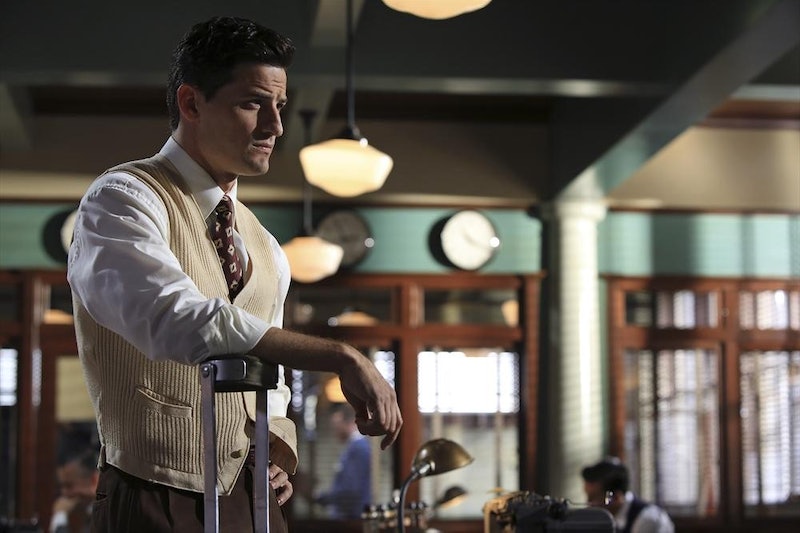 In Tuesday night's season finale of Agent Carter, we didn't get an answer about Peggy's future husband, but don't fret! Agent Sousa asked Peggy out. He put down his crutch before he did it too, which was a nice touch. While she didn't take him up on it right away, the grin on her face as he turned away spoke a thousand words. We really need a second season of Agent Carter now. There are so many unanswered questions about these two characters. Is she ever going to get that drink with him? How did he get injured in the war? Was Captain Steve Rogers present, by any chance? Dare I mention what happened the last time Peggy Carter hesitated to go out with a man she fancied? It may still be too soon? The episode ended with Peggy and Angie moving into one of Howard Stark's guest residences together. Unfortunately, Angie did not reveal that her real name is Maria as I had wished. Love is only in the air for Peggy on Agent Carter, and that is OK.

The episode focused once again on Peggy's former relationship with Captain America. It was absolutely heartbreaking to watch Peggy Carter have to repeat her last moments with Steve with two other important men in her life. However, at the end of the episode she very literally let him go by pouring the last of his blood off the Brooklyn bridge. It was a satisfying end to their story, for now.

Look, Sousa gets major props for confronting Dr. Fennhoff with plugs in his ears. He is the only one who thought of that! Everyone else, from minor SSR Agent to technology mogul Howard Stark, was easily hypnotized by that man and his magic ring. Not our Daniel Sousa! Personally, I think that Peggy should have married him on the spot just for that. Also, can we stop pretending that Enver Gjokaj is not attractive? The man even made earplugs look sexy.

I guess you can hang up your hat if you shipped Peggy with Agent Thompson. The way Chad Michael Murray's character happily took the credit for saving New York City was a major turnoff. However, this did provide another moment, albeit smaller, in favor of Peggy and Sousa. When the two of them were passed over by the federal government's praise in the finale, Sousa was outraged. At worst, he could have been getting indignant on her behalf and trying to impress or protect her. However, he was just as upset that Thompson passed him over, because he had saved his life! The two of them could make a great team.