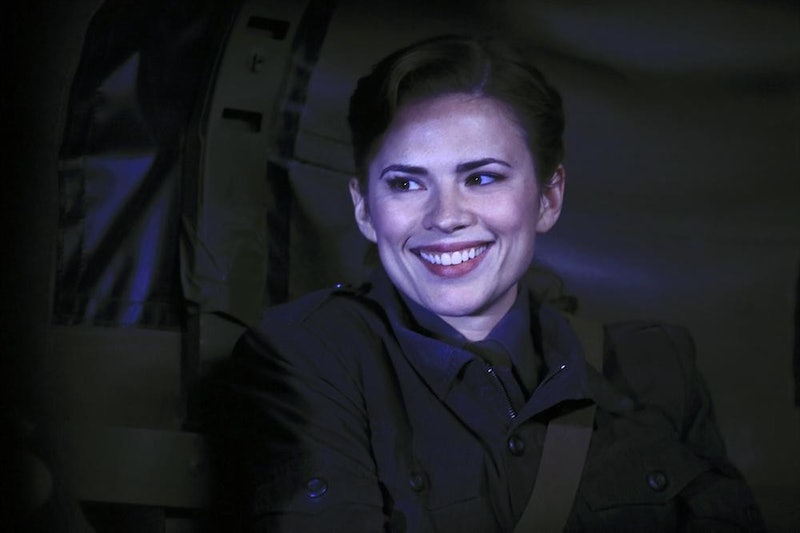 Peggy Carter is a lot of things: a superhero, a Stark employee, and single gal. None of those were easy things to be in the 1940s (though, arguably, being a comic book hero is probably still pretty hard, even today). But Peggy handles it all, even when society tells her she should be at home baking cookies or having babies or whatever other ridiculous gender norms she's expected to put up with while simultaneously saving the world. Being the badass single lady she is, Peggy also, occasionally, does a little flirting. As revealed in Captain America: The Winter Soldier, Agent Carter does eventually get married and have a family. And every fan of the show has been wondering about the identity of the lucky guy. Well, I've got some theories as to who Peggy marries.

As showrunner Michele Fazekas teased at Comic-Con, Peggy's eventual bae could make an appearance on Agent Carter, and the show will "certainly hint at different options." In Captain America: The Winter Soldier, it was revealed that Peggy goes on to marry a soldier whom Cap saved during the war. That still leaves a lot of options, however, and there's still no guarantee the show will stay true to that detail, if the writers feel they have a better idea.

Peggy's husband remains a mystery for now, but I think our girl has her hands full at the minute anyway. Let's check out a few theories as to who the future Mr. Carter could be.

Gabe Jones (played by Derek Luke in Captain America: The First Avenger) is Peggy's best-known boyfriend from the comics. True to the film's narrative, he is a soldier who gets rescued by Captain America, after being sent to a HYDRA prison camp. Luke is also no stranger to TV (just in the past few years he's appeared on Empire, The Americans, and Hawthorne), so there's a real chance the actor could even reprise his role for Agent Carter.

Yes, we know that Jack can be a sexist jerk who sometimes refuses to see Peggy as an equal. He's certainly not my first choice for husband material. But Agent Carter is continually proving herself, and we know that eventually, Jack will be forced to acknowledge how brilliant she is. He did confide his biggest secret to her, about killing surrendering enemy soldiers, so we know he has some vulnerability in there somewhere. Whether that's enough to win Peggy over remains to be seen.

If Peggy is looking for the opposite of Jack, she's found it in Daniel, a kind, respectful fellow S.S.R. agent. Sousa doesn't object to Peggy's role in the organization on the grounds that she's a woman. In fact, he's a total sweetheart. And his injury suggests that he may have required some rescuing during the war. Could Steve Rogers have been the one who saved him?

But let's get real, Peggy doesn't need a man to accomplish her goals of winning World War II and creating workplace equality for women. She's doing just fine on her own, thankyouverymuch. We know she'll get hitched someday, but I hope that's not what viewers are focusing on right now.