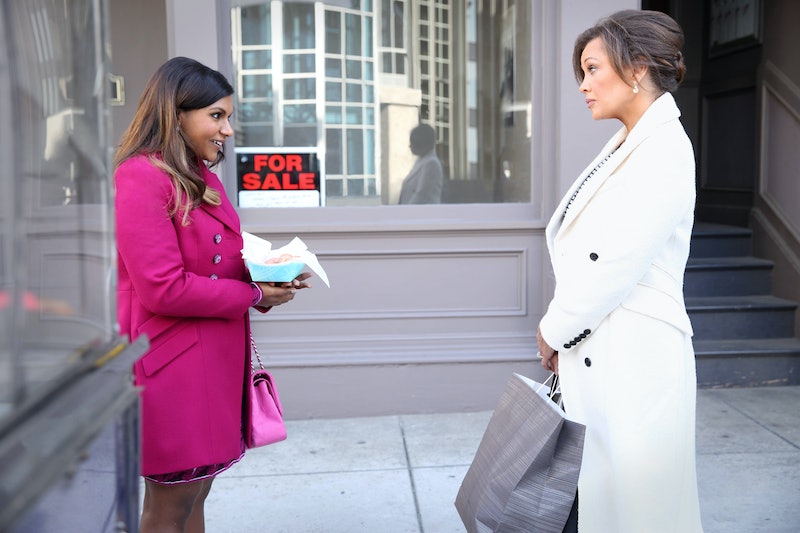 With Mindy expecting two new babies in her life on The Mindy Project — infant baby and a new fertility clinic baby — Shulman & Associates needs a new doctor, especially now that Peter is out of our lives (still not ready to talk about it). Mindy is still working at the practice, she's just "branching out" to do her own thing, which is kind of awesome because if anyone can seamlessly balance a practice, a clinic, and a pregnancy at one time it's (probably?) Mindy Lahiri. But who would the practice add that could ever fill Peter's shoes and compliment the "sexiness" that Mindy sells Shulman & Associates as? That person might just be the incomparable Vanessa Williams, who swung by The Mindy Project this Tuesday.

Williams plays Dr. Suzanne Phillips, an old professor of Mindy's from school, who Mindy runs into while buying donuts (if only we could all run into Vanessa Williams while buying donuts). Dr. Phillips brings up the fact that she is incredibly bored and rich, which is when Mindy mentions that Dr. Phillips should come work at the sexy Shulman & Associates.

Goodbye to all the boring candidates that Jeremy has compiled — seriously, one of them didn't know who Shonda Rhimes is... THE HORROR — because Mindy has solved the staffing issue, right? Wrong. The "interview" with Dr. Phillips is a major Titanic-sized sinker — being an OBGYN is a lot of work — and she respectfully turns them down because they're all a little bit crazy.

Because Mindy's first choice went so poorly, she was tasked with finding another doctor to replace Peter. Unfortunately, she has a bad case of morning sickness — which takes place during every part of the day — and is a little preoccupied to find a replacement. During her feat with baby Castellano controlling her stomach's contents, Mindy was helped by Dr. Bergdahl, the guy that has no idea who Shonda Rhimes is. Danny noticed how helpful Dr. Bergdahl was and decided to hire him on the spot.

He's no Vanessa Williams, but he seems like he'll add some spice to the office... I think. If anything, he'll piss Mindy off with his ignorance of pop culture.