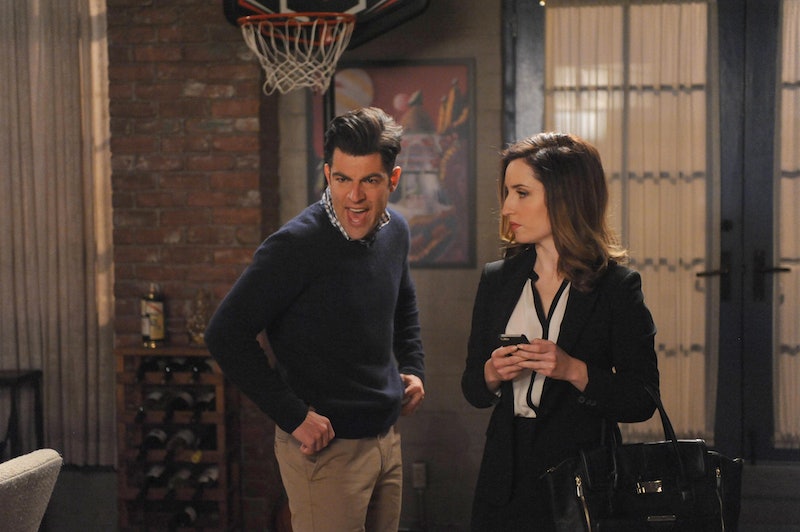 We all have our fair share of irrational fears. For example, I am absolutely petrified of clowns. (If you have to paint a smile on your face, you clearly can't be trusted.) Schmidt, on the other hand, apparently suffers from arachnophobia, which, as many of you know, is a terrifying fear of spiders. This fact took center stage during Tuesday night's New Girl episode, aptly titled "Spiderhunt," which found the loftmates attempting to hunt down and kill — you guessed it — a spider. However, this eight-legged foe isn't the only pest that needs to leave the confines of my TV screen because I've decided that I truly do not like Schmidt's girlfriend, Fawn.

Granted, I've been feeling this way for quite some time now and even more so since Cece confessed that she still has feelings for Schmidt. But this is about more than just my personal 'shipping preferences. At first I had come to admire Fawn's tenacity and the way she takes complete and utter control of her life both personally and professionally. After some time, though, I've started to regard her as more of a bully than anything else. Her presence has been more about degrading Schmidt than raising him up to be a better human being. And Tuesday's episode made that all the more apparent.

The great thing about Cece is that she loves Schmidt for who he really is — spider fears and all. She doesn't want to change him or morph him into someone he's not. Fawn, meanwhile, is the exact opposite and she came right out and admitted as much in front of the whole group over dinner, confessing that while she likes him, she hates his flaws. If this was an actual real-life relationship, I would seriously question their future together because it is not healthy. It's important for a couple to want to bring out the best in each other and raise each other up to be more than they ever thought they could be. But Fawn's approach to this is all wrong and she needs to go… like right now.

So, come on, New Girl writers. Give Schmidt (and us) what we oh-so-rightfully deserve.